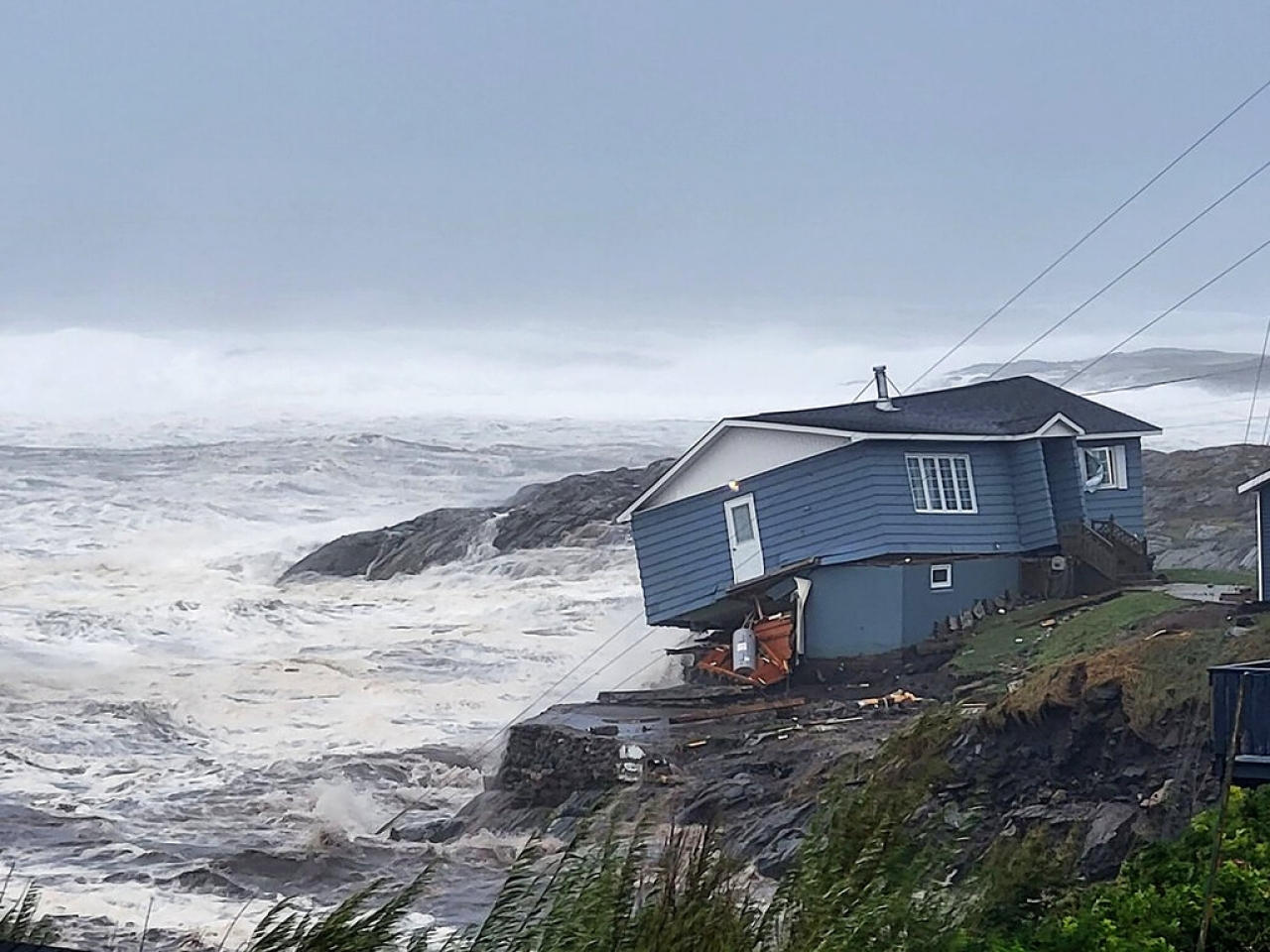 MONTREAL, Sept 25, 2022 (BSS/AFP) - Powerful storm Fiona lashed into eastern Canada on Saturday, cutting power to thousands and washing houses into the sea as it pummeled the area with fierce winds and rains "like nothing we've ever seen," police said.

Two women were reportedly swept into the ocean in Newfoundland, the Royal Canadian Mounted Police said. One was rescued, and investigators are looking into the second case.

Mayor Brian Button of Channel-Port aux Basques, at the southwestern tip of Newfoundland, told CBC News that the scene there was one of "total devastation," adding, "this has become bigger, and worse, than we had imagined."

Rene Roy, a newspaper editor in Channel-Port aux Basques, said, "These are the strongest winds anyone in the community has ever seen. Several houses have been washed into the sea."

As of late afternoon, nearly 500,000 homes were left without power across the region as the storm pummeled a wide area, felling countless trees and ripping roofs from buildings.

"The power lines are down everywhere," Erica Fleck, assistant chief of Halifax Regional Fire and Emergency, told CBC. "It's not safe to be on the roads."

Although downgraded to a post-tropical cyclone, Fiona still packed hurricane-force winds of 80 miles (130 kilometers) per hour as it barreled into Canada after earlier battering the Caribbean, according to meteorologists.

By early Saturday evening, the storm's maximum sustained winds had slowed to 68 mph, according to the Canadian Hurricane Centre (CHC), with the government reporting individual gusts at more than 100 mph in Newfoundland and Labrador, as well as Nova Scotia.

The storm first made landfall in Nova Scotia province around 3:00 am (0600 GMT), according to the CHC.

By early Saturday evening 339,000 households were still without electricity in the province, Nova Scotia Power reported, while New Brunswick reported 40,000 and Prince Edward Island some 82,000.

Police in Charlottetown, the capital of Prince Edward Island, posted images of tangles of downed power lines and roofs punctured by felled trees.

"It's incredible," said Charlottetown mayor Philip Brown on Radio-Canada TV. "It's stronger than Hurricane Juan in 2003."

Nova Scotia Premier Tim Houston said in a statement that "it will take time for Nova Scotia to recover. I just ask everyone for their patience."

Canadian Prime Minister Justin Trudeau, who canceled his trip to Japan for former prime minister Shinzo Abe's funeral so that he can travel to the affected regions, told Canadians that the "government is standing ready to support provinces with any necessary resources."

"We're thinking first and foremost of the people who've had a terrifying past 12 hours," Trudeau said during a press conference Saturday, adding that the country's military would aid in the recovery effort.

Canada had issued severe weather warnings for swaths of its eastern coast, advising people to lay in supplies for at least 72 hours.

Rainfall of up to 7.5 inches (192 millimeters) was recorded in Nova Scotia, the CHC said, with waves of up to 40 feet (12 meters) hitting Nova Scotia and western Newfoundland.

Fiona had skirted Bermuda a day earlier, with residents battening down and authorities calling for people to remain inside as strong winds raked over the British territory. No fatalities or major damage were reported as the storm passed roughly 100 miles to the west of the island.

Fiona killed at least four people in Puerto Rico earlier this week, according to US media, while two deaths were reported in the Dominican Republic and one in the French overseas department of Guadeloupe.

President Joe Biden declared a state of emergency in Puerto Rico, a US territory that is still struggling to recover from Hurricane Maria five years ago.

As the Caribbean licked its wounds, Cuba, Jamaica and Florida were bracing Saturday for the arrival of tropical storm Ian, which is expected to gain power in coming days to reach "at or near major hurricane strength," the NHC said.

In anticipation of the storm, NASA called off the scheduled Tuesday launch of its historic uncrewed mission to the Moon.