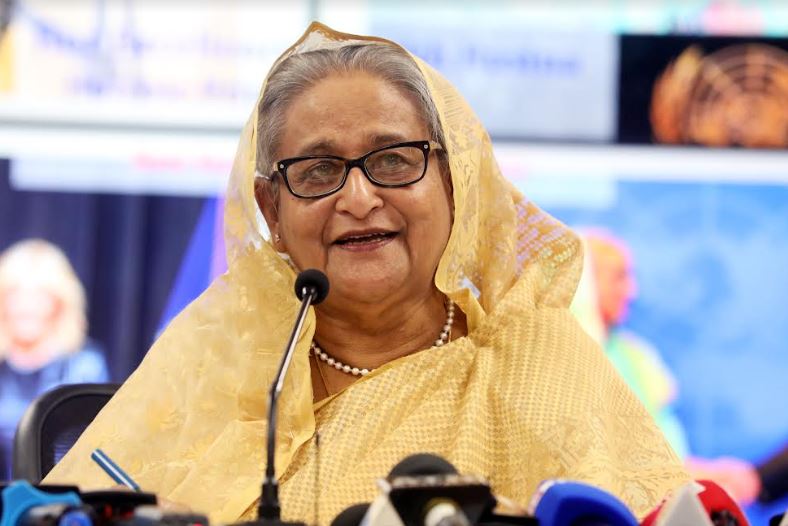 NEW YORK, Sept 24, 2022 (BSS) - Prime Minister Sheikh Hasina today reiterated that election process only becomes transparent in the tenure of the Awami League (AL) government which was not in the past, saying AL always comes to the power through the people's votes.

The premier said this while responding to a question at a press conference held at Bangladesh Permanent Mission in the United Nations here.

She said, "Who are those people who wanted to raise questions regarding elections? AL always fought to establish democracy in the country".

Sheikh Hasina categorically said that people will cast their votes freely in the elections and assured BNP that there is nothing to be worried.

"I think they (BNP) are really worried when there will be a transparent election, as they are not going to get the scope to be in the power through vote rigging and keeping 1.23 crore fake voters in the voters' list. Otherwise there is nothing to be worried," she said.

The premier said that she doesn't know what is there to give so much importance on those people's question regarding the election those who never came to the power by getting votes from the people.

"People cast their votes in the election freely in 2009, 2014 and 2018 elections held under such environment," she added.

Talking about the participation of BNP in the election, she said, BNP didn't participate in the 2014 elections. It was their party's decision, she added.

The premier firmly said that the AL government has ensured the people's right to vote.

Sheikh Hasina also claimed that the AL government has put the election process of the country on the right track which had been derailed during the military regimes and BNP-Jamaat tenures.

About Electronic Voting Machine (EVMs), she said that EVM is a modern system and used in many countries around the world.

"We saw that the elections where the EVM was used got quicker election results and people could give their votes freely," she said.

Sheikh Hasina, however, said that it is right that there are some people against this EVM.

Replying to another query on investment of expatriates of the country, the premier said that investment opportunities have been created so that the expatriates can invest in the country. The government is establishing 100 economic zones for domestic and foreign investment, she added.

In response to a question, she said, among the expatriates who do not have NID, they can open bank accounts with their passports. "That arrangement has already been made."

Answering to another query on 'with what you are returning home from this UNGA', she replied that "Friendship, I am returning home with friendship for Bangladesh and everyone tried to say that about the development of Bangladesh."