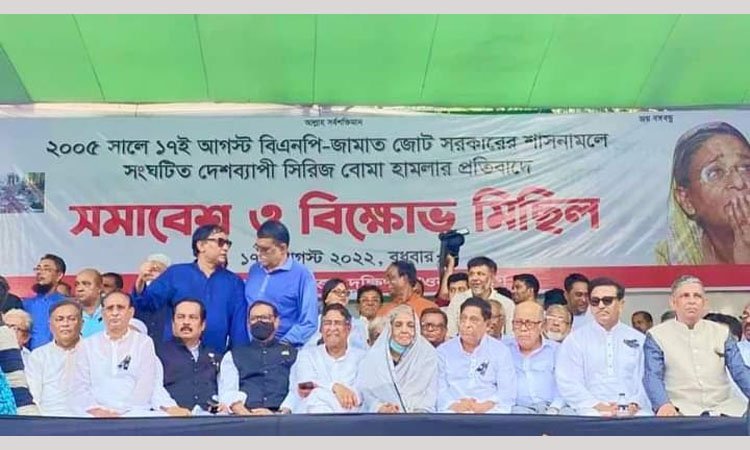 DHAKA, Aug 17, 2022 (BSS) – Awami League (AL) General Secretary Obaidul Quader today said gone are the days to assume the state power through arson terrorism and bombing as the Bangladesh Nationalist Party (BNP) would be resisted on the street.

“There will be a game in the next election. The game will be played on the street. We will face them (BNP),” he told a protest rally here.

The Dhaka South and North units of the AL jointly organised the rally at Suhrawardy Udyan, protesting the series bomb attack carried out across the country during the BNP-Jamaat reign on August 17 in 2005.

Quader, also the road transport and bridges minister, said the BNP got frustrated after forming a “so-called unity” before the last national elections and it will experience the same this time too.

He recalled that the AL was not born at gun point rather it has emerged from the streets.

Pointing at BNP secretary general Mirza Fakhrul Islam Alamgir, AL presidium member Jahangir Kabir Nanak Nanak old the rally the BNP has no ability to do anything in Bangladesh.

He said AL President and Prime Minister Sheikh Hasina believes in democracy and for that the BNP leaders can speak sitting at Nayapaltan.

“But if their statements violate political norms, they will be given a harsher reply,” Nanak said.

AL presidium member Mofazzal Hossain Chowdhury Maya said the AL showed a sample by holding this protest rally today and the BNP-Jamaat will be thrown into the Bay of Bengal in next September.

“Wherever the BNP-Jamaat men are found, there should be a resistance against them,” he added.

Referring to the stigmatised day in Bangladesh's history on August 17 in 2005, AL joint general secretary Mahbubul Alam Hanif said BNP-Jamaat was plotting to turn Bangladesh into a radical fundamentalist state.

“Their final rehearsal was held on August 17. There was a series bomb attack in more than 500 places of 63 districts across the country. This was not an isolated incident. They wanted to turn Bangladesh into a state of militancy,” he said.

AL joint general secretary and Information and Broadcasting Minister Dr Hasan Mahmud said the BNP will not be allowed in any way to cause harm to the country’s people and “from today we also stay in the field”.

Terming the BNP a petrol-bomb force, he said the AL will not let this force to destroy people's lives.

Later, a protest procession was brought out from the premises of the Institution of Engineers, Bangladesh adjacent to Suhrawardy Udyan and ended on reaching the AL central office at 23 Bangabandhu Avenue after parading Matsya Bhaban, Kadam Foara, Press Club and Zero Point areas.