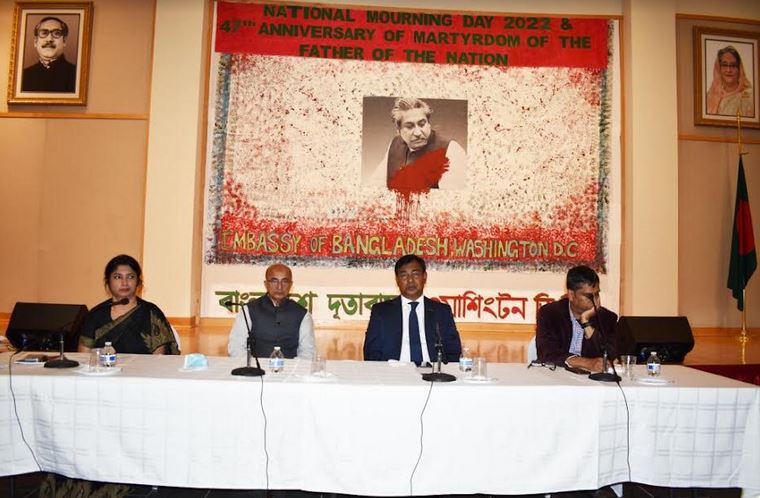 "It would be a game-changer between Bangladesh-US bilateral relations by
deporting the fugitive convicted killer of Bangabandhu Rashed Chowdhury who
is now staying in the US," he said this while addressing a seminar as the
chief guest on Monday afternoon.

Bangladesh Embassy in Washington DC organised the seminar as part of the
observance of the National Mourning Day and the 47th martyrdom anniversary of
Father of Nation Bangabandhu Sheikh Mujibur Rahman with Bangladesh Ambassador
to the United States (US) M Shahidul Islam in the chair.

The seminar titled "Deportation of the killer of Bangabandhu Sheikh Mujibur
Rahman: A long pending issue in Bangladesh-US relations".

Dr Tawfiq-e-Elahi Chowdhury, a gallantry award-recipient valiant Freedom
Fighter said that the continued stay of Bangabandhu's killer (Rashed
Chowdhury) in the US was unfortunate.

Bangladesh Ambassador in the US, in his remarks, gave an overview on the
Awami League government's efforts to secure deportation of Bangabandhu's
self-confessed killer Rashed Chowdhury.

He said that the main objective of the seminar was to create greater
awareness among the US citizens and Bangladeshi-American diaspora of the
urgent need for extradition of the heinous killer of Bangabandhu to further
solidify Bangladesh-US relations.

Professor Dr ABM Nasir, in his keynoter paper, said killer Rashed Chowdhury
has committed crimes against humanity by brutally killing three children, two
pregnant females and other unarmed civilians. He demanded to the US
government to immediately detain and deport Rashed Chowdhury to Bangladesh.

The Prime Minister's Energy Adviser earlier inaugurated a 17-day long photo
exhibition on the life and works of the Father of the Nation at Bangabandhu
Auditorium here.

Earlier, the Embassy chalked out elaborate programs to pay deepest homage to
Bangabandhu, the greatest Bengali of all time who was brutally assassinated
along with most of his family members on the fateful night of August 15 in
1975.

The day's programs began in the morning with the ceremonial hoisting of the
national flag at half-mast by Ambassador Shahidul Islam. The national anthem
was played at this time.

Later, the Ambassador accompanied by the Embassy officers, placed a floral
wreath at the bust of the Father of the Nation at the Bangabandhu Corner.

Counsellor Mohammad Moniruzzaman and Counsellor and Head of Chancery Md
Mahmudul Islam conducted the programmes in the afternoon and morning
respectively.