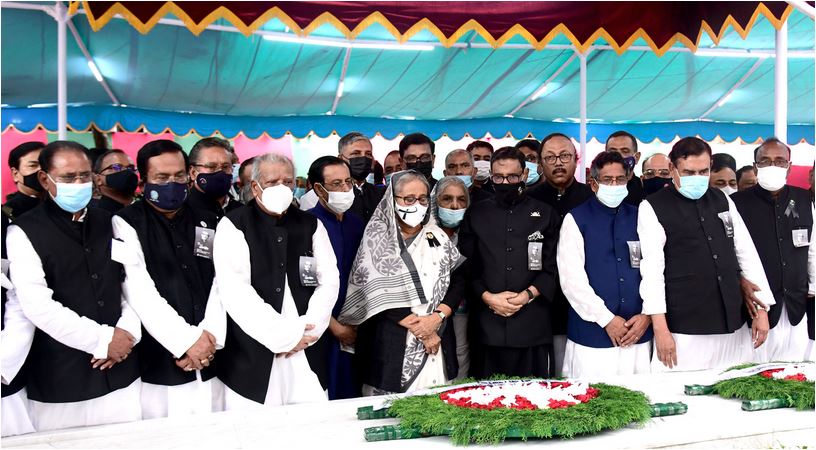 Peoples flooded the street in front of Bangabandhu Museum at city’s Dhanmondi this morning marking the day.

The National Mourning Day programme began with paying homage at the portrait of Father of the Nation during this morning.

Prime Minister Sheikh Hasina first paid homage at the portrait of Bangabandhu at 6:30am. Members of a smartly turned out contingent of the armed forces gave guard of honour, the bugle played the last post. Then the Prime Minister offered fateha and took part in munajat.

Later, Sheikh Hasian as the party chief along with cabinet members and Awami League central leaders paid homage at the portrait of Bangabandhu.

People of all strata including male, female, different school and college students, children and adolescents gathered on the street at Dhanmondi Road no-32 within 6:00am this morning, wearing black badge on their chest and carrying black banners in their hands.

All the people recalled Father of the Nation and showed respect to him by placing floral wreaths at the portrait of Bangabandhu Sheikh Mujibur Rahman. People of different cast and creed started gathering in front of Bangabandhu’ residence from 7am today.

The Bangabandhu Museum was kept open for the people after the Prime Minister left the place.

Meanwhile, Prime Minister Sheikh Hasina placed floral wreaths at the graves of the martyrs of August 15 including her mother, brothers and wives of his brothers at Banani at 8:30am. The prime minister offered fateha and took part in munajat.
Cabinet members and party central leaders, among others, were presented during this time.