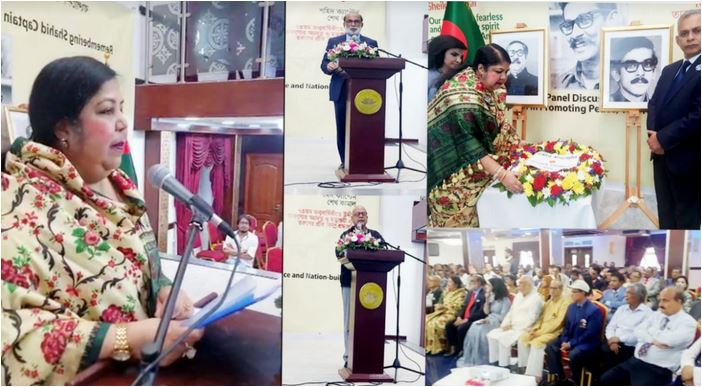 "Bangladesh's emerging multi-dimensional talent Sheikh Kamal was a shining star in sports, culture and theater... He was an established dramatist, player and organiser," she said.

Kamal had set a precedent of far-reaching dreams, dedication and ambition by establishing modern clubs like Abahani and he was the first to bring in foreign coaches and try to present the local sports in the world arena, she added.

The speaker said these at a panel discussion titled "Remembering Shaheed Captain Sheikh Kamal: Role of Youth and Sports in Promoting Peace, Tolerance and Nation Building".

She paid tributes to Captain Sheikh Kamal by placing wreaths at his portrait and inaugurated a photo exhibition organized on the martyred freedom fighter Sheikh Kamal, said a press release.

The speaker said that the month of August is a tragic month for the Bengali Nation as in this month the Father of the Nation Bangabandhu Sheikh Mujibur Rahman, along with his family members including Kamal, was brutally killed.

The speaker said, Sheikh Kamal was very modest despite being the son of the President and he lived a very simple life.

"Kamal rarely had the chance to meet his own father as Bangabandhu had to spend a long time in jail during Pakistan regime. When Bangabandhu was released from prison in February 1952, Sheikh Kamal had just learned to speak. He never saw his father that way. At that time, he suddenly said to his elder sister Sheikh Hasina, should I call your father as father?" the speaker said.