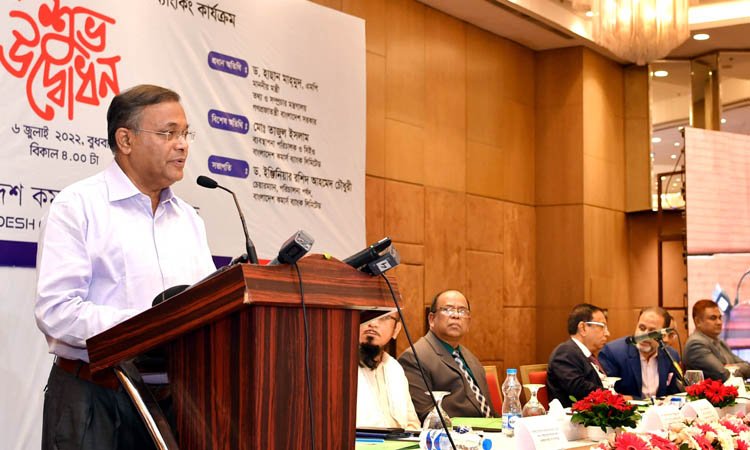 He said this while talking to reporters after inaugurating the Islamic banking services of Bangladesh Commerce Bank Limited at a hotel here.

Chaired by Dr Engineer Rashid Ahmed Chowdhury, Chairman of the Board of Directors of Bangladesh Commerce Bank Limited, the function was addressed, among others, by bank's managing director and CEO Tajul Islam.

Those who do politics for the welfare of people never think of capturing power, he said, adding that BNP founder Ziaur Rahman had assumed power forcibly as he seized power at gun point.

Mentioning that Zia formed BNP disseminating the wastage of power and he grabbed power, the minister said: "Our government is in power with the verdict of the people. We have formed the government after winning three consecutive times."

Hasan said BNP got five seats in the last general elections even after forming an alliance with all right and left leaning as well as extremely right and extremely left leaning political parties.

Noting that BNP is not only afraid of EVMs, but it also afraid of technology, he said when a proposal was given for setting up a submarine cable free of cost during Begum Khaleda Zia's premiership, she said that it would destroy the privacy of Bangladesh.

"She (Khaleda) rejected the proposal of setting up the submarine cable, which we installed later at a cost of Taka hundreds of crore," the AL joint general secretary said.

In all developed countries of the world like United States, Germany, France, Australia, India and even in Malaysia, voting is done through EVMs, Hasan said, adding, "But, they (BNP) speaking against the EVM since we proposed for it. I think, they would have liked the proposal if it would be placed by someone other instead of us".

It means that they (BNP) want to continue the bad culture of occupying polling booths and vote rigging introduced by Ziaur Rahman, the minister said, adding: "If that bad culture has to be stopped, there is no alternative to voting machines or EVMs. But they are afraid of it".