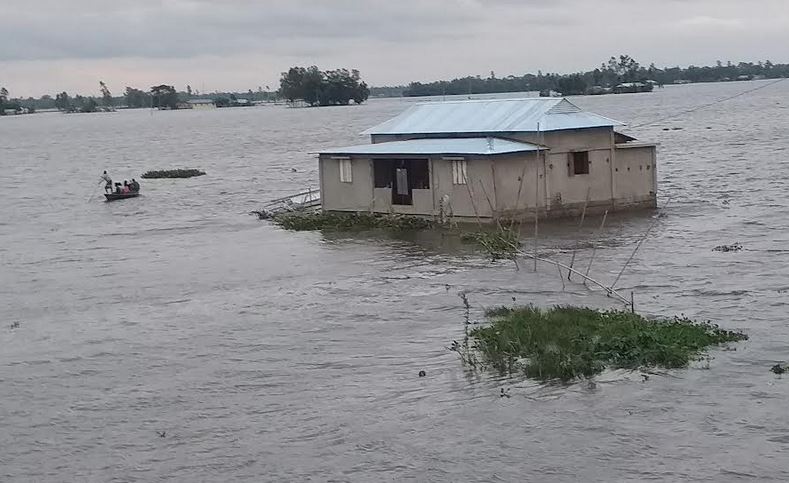 DHAKA, July 2, 2022 (BSS) - Officials predicted less possibility of fresh flooding in Bangladesh till mid July simultaneously they said the ongoing flood may longer due to slow passing of water through major rivers and their tributaries.

"Both northern and northeastern parts of Bangladesh witnessed
severe flooding on June 15, this year and vast swaths of these regions are still reeling from catastrophic impact of the deluge as a result of slow receding of water," Pritom Kumar Sarkar, assistant engineer of Flood Forecasting and Warning Centre (FFWC) told BSS today.

But the flood situation in north and northwestern worsened further after swelling of major rivers as inside Bangladesh and upstream regions
recorded heavy downpour in late June, he added.

Among the 109 monitored river stations, four have been registered steady while water levels at five stations are flowing above the danger level, a bulletin issued by the FFWC said here today.
The Surma at Kanaighat, the Kushiyara at Amalshid and Sheola, the Old Surma at Derai, and the Someswari at Kalmakanda are flowing above the danger level by 49cm, 67 cm, 23cm, 13cm and 30cm respectively.

Significant rainfall was recorded at some stations in different districts during the last 24 hours ending at 9 am today, the bulletin added.

A total of 148 mm (millimeter) rainfalls were recorded at Teknaf, 90 mm at Bogra and 85 mm at Faridpur.

A total of 52 mm rainfalls were registered at Cherrapunji (Meghalaya), 37mm at Jalpaiguri (West Bangal) and 37 mm at Darjeeling (West Bengal).

The Ganges-Padma river is in rising trend, which may continue rising in next 72 hours. Flood situation in Kurigram, Sylhet, Sunamganj, Netrokona, Kishoreganj & Brahmanbaria districts in Bangladesh may improve in next 24 hours.

Waterborne diseases are spreading in the flood-hit regions of Bangladesh as
floodwater started receding.
"Many people are suffering from diarrhoea, skin diseases, dysentery, cholera
and other waterborne diseases," Directorate General of Health Services (DGHS)
sources said.

In the past 24 hours, a total of 324 people have been affected by diarrhoea
in four flood-hit divisions -- Sylhet, Rangpur, Chattogram and Mymensingh --
while 54 people have also suffered from skin diseases, a press release issued
by the DGHS said.

To provide healthcare supports to the flood affected regions of the country,
as many as 2,047 medical teams have been working since beginning of the
flood, it added.

Roughly five millions of people were marooned during the flood, they said
adding: "A large of number of people still have been marooned by the
floodwater."

Deputy Commissioner of Sylhet Md Mojibor Rahman told BSS as many as 29,99,433

people in the district have been affected by the ongoing flood while around
40,000 people are still living at flood shelters.

He said relief materials including rice, dry food, medicines, and drinking
water are being distributed among the people in the flood-hit areas.

In Sunamganj, nearly 30 lakh people have been badly affected by the
devastating flood and the hard hit district is still reeling from the slow
improvement of receding floodwater. Local administration as well as non-
government organizations is continuing relief operation for reducing
suffering of flood victims.

Monsoon rains and gushing waters from upstream India worsened Bangladesh
flood situation with experts calling it one of the worst floods while
millions of people have been affected by the deluge, Md. Arifuzzaman
Bhuyan, executive engineer of the FFWC, said.

Northeastern and northern parts of Bangladesh may witness prolonged flood as
record breaking rainfalls were recorded inside Bangladesh and upstream states
of India during the ongoing flood situation.

"We have seen that both Bangladesh and upstream states of Meghalaya and Assam
and western Himalayan regions of India recorded heavy rainfall, the highest
over 100 years," Professor Md Mansur Rahman of Institute of Water and Flood
Management of BUET said.

Major rivers and their tributaries of Bangladesh have no capacity to contain
such huge volume of rains, which ultimately has caused massive flooding in
northeastern and northern regions of the country, he added.

Mansur said there is a huge gap between Bangladesh and upstream regions of
India in terms of elevation from sea level. "So, onrush of water enters
Bangladesh with a faster pace, which inundated vast areas of the country in a
shorter time," he added.

The hydrologist said a large number of embankments have been built in both
Bangladesh and Indian regions to control flow of water of major rivers which
are the main reasons for increasing frequency of flooding.

The ongoing flood in Meghna basin may prolong as "The only exit point of
flood water is Bhairab at the Megna river will take much time to pass such
huge volume of flood water into the Bay of Bangal... meaning flood in
northeastern region is likely to be prolonged, if the heavy downpour
continue."