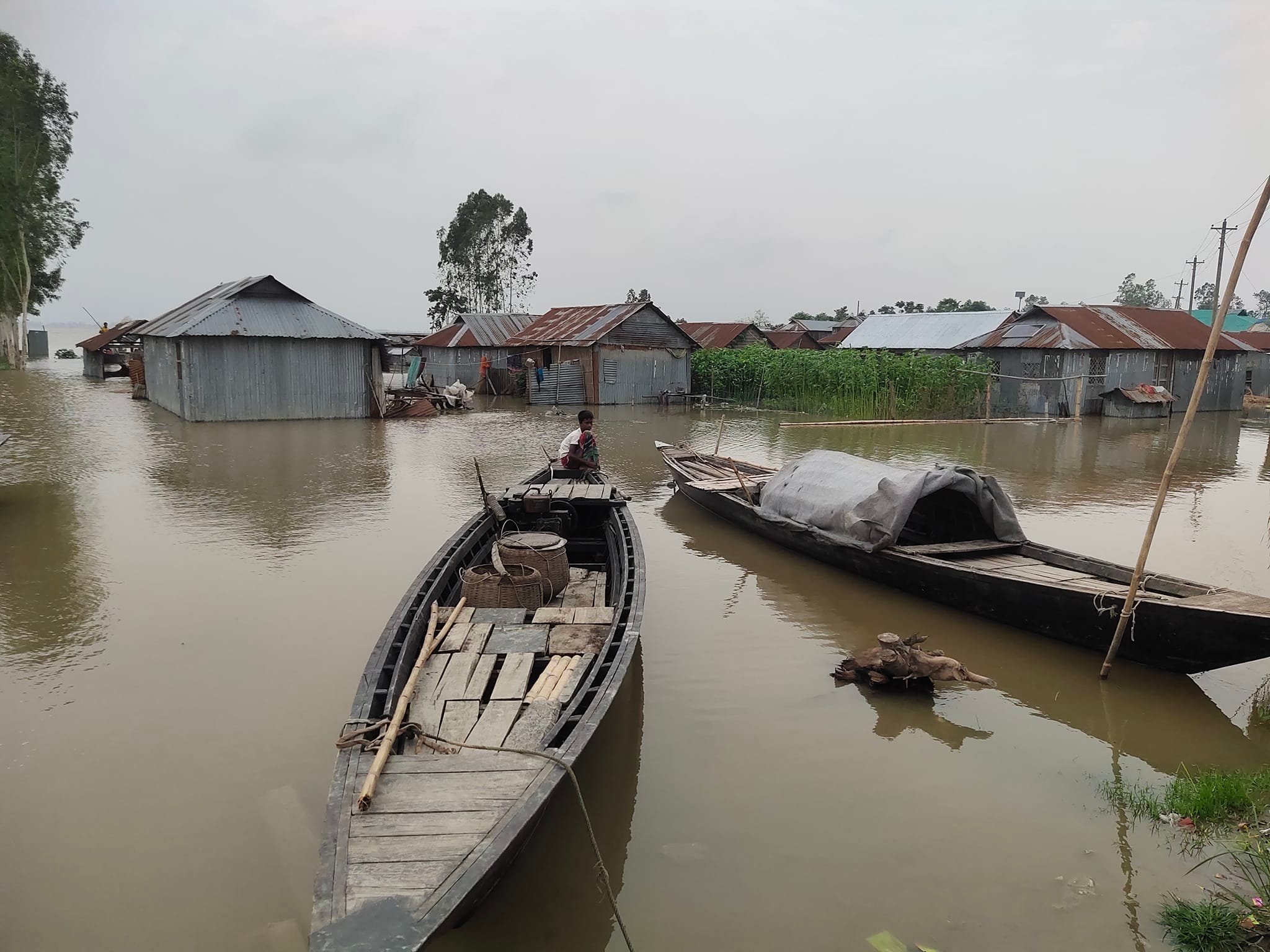 DHAKA, June 23, 2022 (BSS) - Officials said flood situation is gradually improving in northeastern and northern parts of Bangladesh while other low-lying areas of the country are likely to be inundated for short period of time.

"Flood in northeastern and northern region is improving as flood water started receding from affected areas. As the pace of receding flood water is very slow, flood might linger in the country," a Flood Forecasting and Warning Centre (FFWC) spokesman Md Arifuzzaman Bhuyan told BSS.

"Water now continued to flow above the danger lines in two of the country's four major river basins . . . the situation is worst since the 2004 flooding," he added.

Monsoon rains and gushing waters from upstream India worsened Bangladesh flood situation with experts calling it the worst since 2004 while millions of people are still marooned, the FFWC official said.

Northeastern and northern parts of Bangladesh may witness prolonged flood as record breaking rainfalls were recorded inside Bangladesh and upstream states of India during the ongoing flood.

"We have seen that both Bangladesh and upstream states of Meghalaya and Assam and western Himalayan regions of India recorded heavy rainfall, the highest over 100 years," Professor Md Mansur Rahman of Institute of Water and Flood Management of BUET said.

Major rivers and their tributaries of Bangladesh have no capacity to contain such huge volume of rains, which ultimately is causing massive flooding in northeastern and northern regions of the country, he added.

Mansur said there is a huge gap between Bangladesh and upstream regions of India in terms of elevation from sea level. "So, onrush of water enters Bangladesh with a faster pace, which causes flooding," he added.

The hydrologist said a large number of embankments have been built in both Bangladesh and Indian regions to control flow of water of major rivers, which are the main reasons for increasing frequency of flooding.

The ongoing flood in Meghna basin may prolong as "only exit point of flood water is Bhairab at the Megna river will take much time to pass such huge volume of flood water into the Bay of Bangal... meaning flood in northeastern region is likely to be prolonged, if the heavy downpour continue."

Among the 109 monitored stations, water levels at 19 stations are flowing above the danger level, a bulletin issued by the FFWC said here today.

Except Ganges and Padma, all the major rivers in the country are in falling trend, the FFWC bulletin added.

According to the numerical weather forecast of meteorological agencies, except Teesta basin, heavy to very heavy rainfall inside Bangladesh and different upstream Indian regions is unlikely in the next 48 hours, it added.

The FFWC bulletin added the Brahmaputa-Jamuna, Dharala, Dudhkumar and all the major river of the north-eastern region of the country (except the Titas) may continue falling, while the Ganges-Padma River may remain steady in the next 48 hours.

"In the next 48 to 72 hours, there is a chance of medium to heavy rainfall in the sub-Himalayan West-Bengal (Jalpaiguri, Sikkim). As a result, the water level of Teesta river may rise and remain near danger level," the FFWC bulletin added.

Flood situation in the Sylhet, Sunamganj and Netrokona districts may improve, while in the Kishoreganj and Brahmanbaria districts may remain unchanged in next 24 hours, the forecasting centre added.

In the next 24 hours, the flood situation in Kurigram, Gaibandha, Bogra, Serajganj, Tangail and Jamalpur may improve, according to the FFWC statement while there is chance of short duration flood in the low-lying areas of Rajbari, Shariatpur and Madaripur districts in next 24 hours.