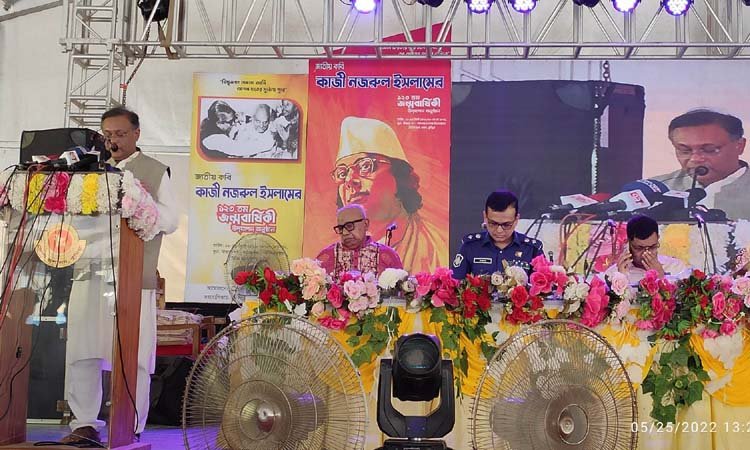 "His (Nazrul) poems and songs have enlightened people and he was thrown to jail time and again due to his poetry. His poems and songs were also banned. His literary works made him unique. For this reason, Kazi Nazrul Islam is distinctive than other poets," he said.

Hasan inaugurated the function through releasing of balloons with other guests.

The minister said Bidrohi Kobi Kazi Nazrul had proved that a poet could encourage people, embolden the freedom loving people and make them revel. He authored poem on communal harmony when communal clash were taking place in the Indian sub-continent, he added.

He said there was no state in the history of 5,000 years of the Bangalee nation before establishing the independent Bangladesh by Father of the Nation Bangabandhu Sheikh Mujibur Rahman. Bangabandhu had awakened the Bangalees getting encouragement from Kazi Nazrul Islam, he added.

The minister said Nazrul came Cumilla time and again and was stayed a house in Kandirpar.

Replying to a query over elections, Hasan said, in fact, BNP is afraid of polls. For this, they don't want to take part in general polls, even the union parishads and city corporation polls, he added.

The minister, however, hoped that they (BNP) will take part in elections.

Khalid said Kazi Nazrul's 'Bidrohi' is a unique write up in the history of poems. He (Nazrul) wrote the poem when he was only 22 years old in 1921, he added.