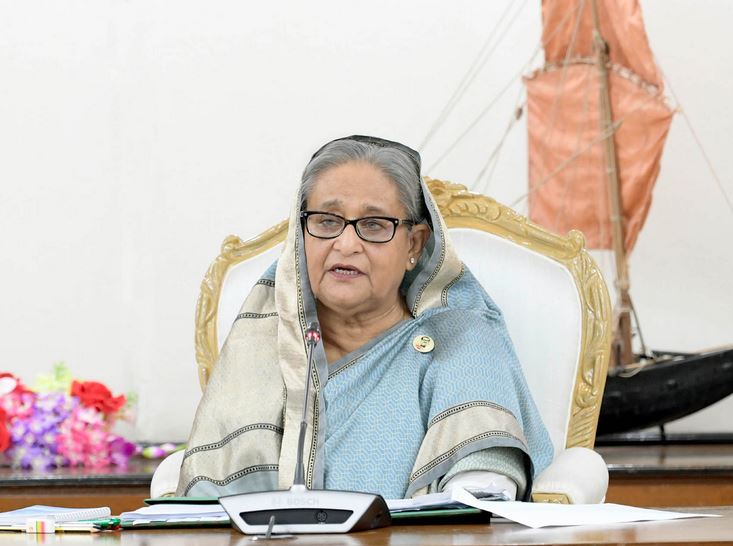 "The characteristics of all areas of Bangladesh are not identical. . . Bangladesh needs to be better known for any development project," she said while addressing Delta Governance Council's first meeting at her office here.

The premier said the government took "Delta Plan-2100" to secure the people of this delta and provide them a better life and asked authorities concerned to take planned steps for its implementation.

Sheikh Hasina added that any planned step could solve easily any difficult task.

The premier particularly asked the authorities concerned to lay an extra emphasis on exploring the blue economy utilizing the country's vast maritime resources to boost the national economy.

She said the country's vast maritime areas would be included to the Delta Plan.

Sheikh Hasina said it was a wrong decision to construct the bridge over Jamuna River with having the length of only 4 kilometers unlike Padma Bridge which was built keeping the proper length.

"I didn't let the Padma Bridge be constructed smaller. We've constructed the bridge keeping buffer zones with the river. So, the bridge has become the longest one (in the country)," she said.

"But I think it was a wrong decision to reduce the length of Jamuna bridge to 4-kilometer. Since its design and plan were made earlier, we had nothing more to do there. I only could include the rail line in it," she said.

The premier said Father of the Nation Bangabandhu Sheikh Mujibur Rahman discussed the construction of a bridge over Jamuna River with the Japanese government while visiting to Tokyo and then Japan sent a team to conduct a feasibility study over it.

"The feasibility study started in 1974," she added.

So, Bangladesh has a concrete feasibility report over the Jamuna River, she said, adding that her government conducted a feasibility study over Padma River during the construction of Padma Bridge.

The head of the government said the design of the bridge was reshaped after the feasibility report found differences in the depth of the mighty Padma River at various locations in the bridge project site.

"I didn't let the bridge be built through any cooked up manner . . . I changed the design," she said.

The premier also said the character of flow and bottom-soil of the rivers including Jamuna and Padma change after every rainy season in the country.

Since the situation in Bangladesh is not the same as in other countries, the plans have to be taken rightly keeping this difference in mind, she added.

The Prime Minister said her government has taken Delta Plan to protect the people of the delta region and give them a better life.

She said the huge maritime boundary that Bangladesh has got should also be linked with this plan.

Mentioning that marine resources can also be used for food security of the country, Sheikh Hasina said there are huge fish stocks in the maritime areas.

Emphasizing on marine research, she said there are two types of sea research for extraction of fishery resources and extraction of mineral resources.

In order to extract resources in the deep sea, there must be research in the sea, she said, adding a marine research institute has already been set up in Cox's Bazar of Bangladesh.

The premier said her government has taken Blue Economy plan for the use of marine resources. "We cannot afford to lose these resources. We need to see how to use it economically," she added.

Mentioning that Bangladesh has no responsibility for climate change, she said climate change is happening because of the developed countries, but its impact is falling on Bangladesh.

Sheikh Hasina emphasized on keeping the Bay of Bengal and the rivers of the country pollution-free along with proper utilization of sea resources. "We also need to think about how we can use this resource," she added.

The head of government directed the authorities concerned to keep the rivers and canals active as well as pollution-free.

Mentioning that construction of any bridge should be planned keeping in view the character of the river, she gave a comparative picture of the constructions of Padma Bridge with Jamuna Bridge.

Besides, the Prime Minister also highlighted the necessity of regular dredging to maintain the navigability of the country's rivers and keeping the river and channels running.

Referring to the MoU that has already been signed between Bangladesh and the Netherlands for the implementation of Delta Plan, she said some changes and modifications can be made from time to time as required by this plan till 2100.

The Prime Minister said the delta plan was adopted keeping in mind that the most important thing is the socio-economic development of the people of this region.

She said she has given directives to construct elevated roads over haors, beels and other water bodies in order to maintain the natural water flow.

Sheikh Hasina put importance on the construction of adequate culverts and bridges on roads so that the water flow is not hampered.