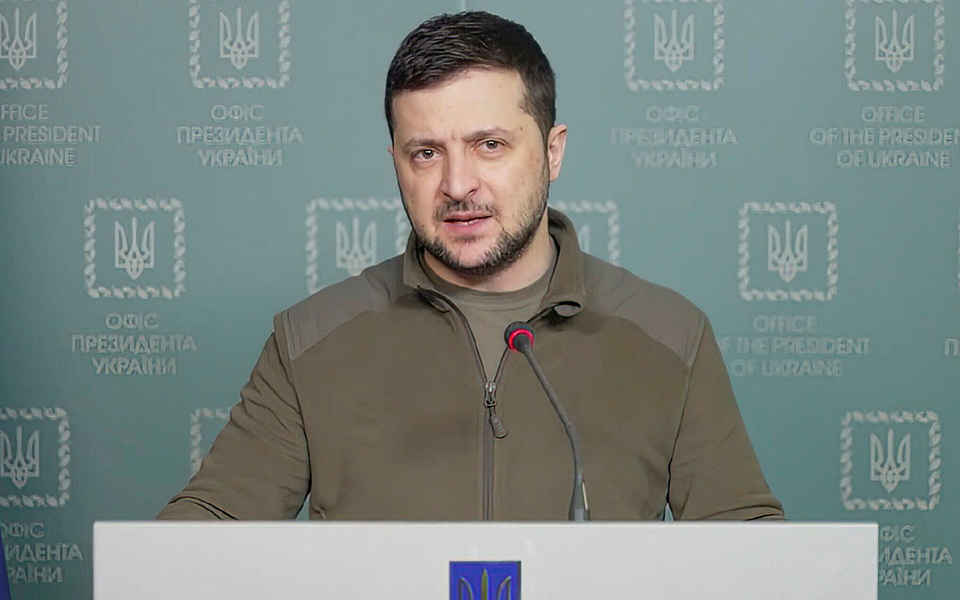 KYIV, Ukraine, May 22, 2022 (BSS/AFP) - Ukrainian President Volodymyr Zelensky has warned only a diplomatic breakthrough rather than an outright military victory can end Russia's war on his country, while pushing its case for EU membership.

Zelensky also appealed for more military aid, even as US President Joe Biden formally signed off on a $40-billion package of aid for the Ukrainian war effort.

And he insisted Saturday that his war-ravaged country should be a full candidate to join the EU, rejecting a suggestion from France's President Emmanuel Macron and some other EU leaders that a sort of associated political community be created as a waiting zone for a membership bid.

"Because, believe me, it will not be compromise with Ukraine in Europe, it will be another compromise between Europe and Russia."

Speaking on Ukrainian television Saturday, Zelensky said: "There are things that can only be reached at the negotiating table."

The war "will be bloody, there will be fighting but will only definitively end through diplomacy".

"Discussions between Ukraine and Russia will decidedly take place. Under what format I don't know," he added.

But he promised that the result would be "fair" for Ukraine.

After just over 12 weeks of fierce fighting, Ukrainian forces have halted Russian attempts to seize Kyiv and the northern city of Kharkiv, but they are under intense pressure in the eastern Donbas region.

Moscow's army has flattened and seized the Black Sea port of Mariupol and subjected Ukrainian troops and towns in the east to relentless ground and artillery attacks.

On Saturday, Russia's defence ministry claimed to have struck with cruise missiles a large stockpile of weapons supplied by the West in the country's northwest Zhytomyr region.

"Long-range, high-precision Kalibr missiles, launched from the sea, destroyed a large consignment of weapons and military equipment supplied by the United States and European countries," the ministry said. The strike has yet to be independently confirmed.

Zelensky's Western allies have shipped a steady stream of modern weaponry to his forces and imposed sweeping sanctions on the Russian economy and President Vladimir Putin's inner circle.

The Kremlin has responded by disrupting European energy supplies.

On Saturday, Russian energy giant Gazprom said it had halted supplies to neighbouring Finland as it had not received the ruble payments it was due.

Helsinki had refused to pay its bill in rubles, which Moscow had demanded in a bid to side-step financial sanctions.

In 2021, Gazprom supplied about two-thirds of the country's gas consumption but only eight percent of its total energy use.

Gasum, Finland's state-owned energy company, said it would use other sources, such as the Balticconnector pipeline, which links Finland to fellow EU member Estonia.

Moscow cut off gas to Poland and Bulgaria last month, a move the European Union denounced as "blackmail".

The row over Finland's gas bill comes just days after the country joined neighbouring Sweden in breaking their historical military non-alignment and applying to join NATO.

Moscow has warned Finland that joining NATO would be "a grave mistake with far-reaching consequences", and Defence Minister Sergei Shoigu has said it will respond by building military bases in western Russia.

But both Finland and Sweden are now apparently on the fast track to join the military alliance, with Biden this week offering "full, total, complete backing" to their bids.

All 30 existing NATO members must agree, however, and Turkey has condemned Sweden's alleged tolerance for the presence of exiled Kurdistan Workers' Party (PKK) militants

On the ground in Ukraine, the fighting remains fiercest in the eastern region of Donbas, a Russian-speaking area partially controlled by pro-Kremlin separatists since 2014.

In Severodonetsk, a frontline city now at risk of encirclement, 12 people were killed and another 40 wounded by Russian shelling, said regional governor Sergiy Gaiday.

"The Russians are using artillery day and night," he said.

In the neighbouring Donetsk region, governor Pavlo Kyrylenko said on Telegram on Saturday that seven civilians had been killed and 10 wounded.

Further north in Kharkiv, just 50 kilometres from the border with Russia, new networks of trenches and checkpoints have cropped up as the city prepares to defend against a fresh assault.

"When we were here on the 24th of February there were no positions at all," says "Doctor", a medic with the National Guard, referring to the day the Russians invaded.

"But now we have trenches, we have well-protected zones, so for them, it would be impossibly hard to capture (this position)."

On the roads leading out of the city -- some of which have been closed off -- civilians help soldiers fill sandbags for the checkpoints.

"We have a problem, we are at war," jokes a soldier as he checks a vehicle and turns it back.

On Friday, Moscow declared its bloody, months-long battle for the Azovstal steelworks in Mariupol at an end.

Russian defence ministry spokesman Igor Konashenko said 2,439 Ukrainian personnel had surrendered at the plant since May 16, the final 500 on Friday.

Ukraine hopes to exchange the surrendering soldiers for Russian prisoners. But in Donetsk, pro-Kremlin authorities have threatened to put some of them on trial.

A Russian negotiator on Saturday said Moscow would consider exchanging prisoners from Ukraine's far-right Azov battalion for Viktor Medvedchuk, a wealthy Ukrainian businessman known for his close ties to Putin.

"We are going to study the possibility," said Leonid Slutsky, a senior member of Russia's negotiating team, speaking from the separatist city of Donetsk, the RIA Novosti news agency reported.

Medvedchuk, 67, is a politician and one of Ukraine's richest people. He escaped from house arrest after Russia invaded in February but was re-arrested in mid-April.