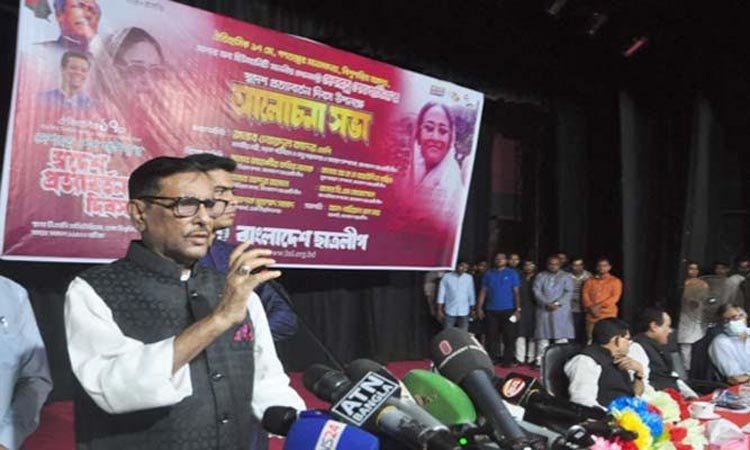 "Awami League will come to power through attaining people's mandate as people are the source of strength of our party," he said.

Noting that if AL leaders and workers remain united, no force can defeat this party, Quader hoped AL will win the next parliamentary polls by attaining people's mandate under the leadership of Sheikh Hasina.

In reply to BNP Secretary General Mirza Fakhrul Islam Alamgir and others who compared Bangladesh with Sri Lanka, Pakistan and Afghanistan, the minister said as long as Sheikh Hasina stays in power, Bangladesh will be compared with European countries and the United States, not Sri Lanka, Afghanistan or Pakistan.

As Bangabandhu's daughter Sheikh Hasina had returned home, Bangladesh today is a voyager on the path of light from darkness.

As she returned to her homeland, Bangladesh today graduated to a developing nation from a least developed country (LDC).

Confined democracy has been freed as Sheikh Hasina returned home, he added.

Mentioning that AL government's achievement and development put BNP in crisis, Quader said when BNP was in power, it didn't do any development works for which they can seek votes from people.

He said the day is not so for to materialize the dream of those who want to enjoy moonlit-night riding on the much-awaited Padma Bridge as the country's biggest project will be inaugurated next month.

"We will send summary to our leader (PM) by the end of next week. She will fix the date," he said.

The World Bank (WB) had cancelled providing credit for Padma Bridge construction raising fake allegations of corruption, he said, adding that at that period Sheikh Hasina, in strong voice, expressed determination that Padma Bridge would be constructed with domestic funds.

Today, Sheikh Hasina's dream has become true as the bridge has been built with the country's own fund, he said.

He said Father of the Nation Bangabandhu Sheikh Mujibur Rahman had brought independence for the nation and his daughter Sheikh Hasina brought economic emancipation.

Those who created communal terrorism on the soil of non-communal Bangladesh fear Bangabandhu's daughter, he mentioned.

He urged all to remain alert against any anti-state and anti-government conspiracy.