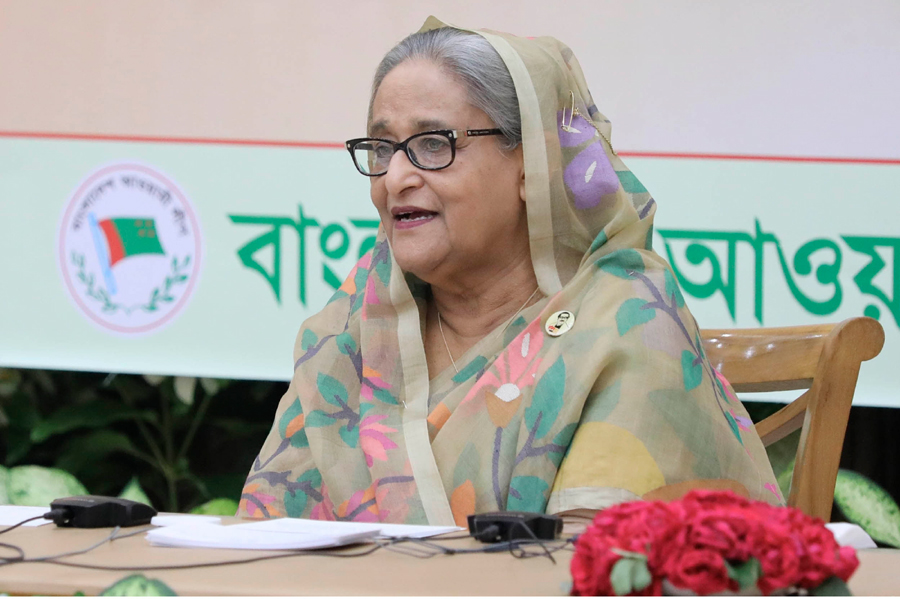 DHAKA, May 18, 2022 (BSS) - Prime Minister Sheikh Hasina today said BNP has no right to speak about elections as they tainted the election process most during their tenures.

The premier made this remark while addressing a discussion meeting organised marking her homecoming day by Relief and Social Welfare Sub-committee of Awami League at its central party office in city's 23 Bangabandhu Avenue.

Joining virtually from her official residence Ganabhaban as chief guest, Sheikh Hasina said everybody can remember the election of Falu (Mosaddek Ali Falu) in Dhaka-10, and Magura election for which Khaleda Zia was ousted from power through movement.

The country also experienced "yes - no" vote in 1977, presidential election in 1978, general elections in 1979 and 1981 election and the February 15 election, she said, adding: "With such a tainted record, the question of election does not befit their mouths," she said.

The Prime Minister added that the development of the election process such as making voter list with pictures, transparent ballot boxes and the use of EVM is the thinking and initiative of Awami League.

"Voting rights of the people is one of the main rights and we've established it. So, they (BNP) can't raise questions on it."

Mentioning that Awami League is elected with people's vote, she said they have returned the voting rights and democratic rights to the people and it is the "real truth".

"Awami League is in power by dint of the people's strength and that is why it is working for the welfare of the people," she added.

The Prime Minister said what the country witnessed in the name of elections after the 1975 assassination of Father of the Nation Bangabandhu Sheikh Mujibur Rahman were snatching of ballot boxes, filling the box after sealing ballots, attacking the opposition and even the scenarios in the election in 2001 were like that.

She noted that they (BNP) want to make the election questionable with the apprehension of defeat in polls.

"If people do not respond to their (BNP) movement, who will be held responsible for that," she questioned.

Sheikh Hasina, also the president of ruling Awami League, asked the ultra learned and knowledgeable-intellectual persons to come and join politics if they have any intention to run the country.

"Please come in the field, come in the vote, none will snatch your votes, at least we can say we don't go to snatch votes, rather we (Awami League) get the votes of the people and will get votes as we work for the people," she added.

The head of government said the country's development could not be visible if the Awami League did not remain in power for a long time.

She highlighted the development activities of the Awami League government in its 1996-2001 tenure which were stopped or destroyed by the BNP-Jamaat led government in 2001-2006 tenure.

Coming down heavily on a section of knowledgeable persons and economists for their unnecessary criticism based on false information regarding the development projects, she said how they could talk foolish like this and "that is my question."

Sheikh Hasina said this section of people is telling that the government has done a grave mistake by implementing the mega projects, like Rooppoor Nuclear Power Plant and rail-line on Padma Bridge.

"They feel pain when we do anything for Bangladesh. Why are they still bootlickers of Pakistani military rulers? They don't see anything good for Bangladesh, they don't feel good when Bangladesh advances," she said.

The premier said the mega projects are for the interest and welfare of the people of Bangladesh.

She mentioned that Bangladesh registered unprecedented development as Awami League is in power.

She said, "Will other parties who were in power can show a single example that they have done any good for the country or its people or brightened the image of the country. No, they can't, they just made Bangladesh the nation of beggars."

The Awami League president asked the leaders and activists of the party to strictly follow the policy and ideology of Awami League and Father of the Nation Bangabandhu Sheikh Mujibur Rahman as it is the only party that can give something to the people of the country.

She mentioned that in 2007 he (Tarique) gave a bond to the caretaker government that he will never do politics in his life and left the country with this bond.

Besides, Khaleda Zia was convicted of embezzling orphans' money and landed in jail, the prime minister said, adding: "She (Khaleda) has been shown humanity and that's why she is now in home instead of jail although she tried to kill me repeatedly."

The opportunity, she said, was offered to Khaleda Zia by an executive order.

Mentioning that after 1975 curfew was enforced continuously which was lifted in 1986, the premier said curfew was in place from 11pm to 8am at that time. This was the scenario of Bangladesh and people had no right to move and speak, she added.

Even after formation of the government in 2009, she said Awami League had to overcome various obstacles as BNP used petrol bombs and burned people alive.

"We construct roads and they cut roads. We plant trees and they cut down trees. In this way BNP has repeatedly tried to take the country towards destruction and overthrow the government," Sheikh Hasina said, adding: "That's why the people voted for Awami League and did not respond to the call of BNP."

May 17 was the 42nd homecoming day of Awami League President and Prime Minister Sheikh Hasina. On May 17 in 1981, she returned the country after a long exile.

Father of the Nation Bangabandhu Sheikh Mujibur Rahman was brutally killed along with most of his family members on August 15 in 1975 and his two daughters - Sheikh Hasina and Sheikh Rehana - luckily escaped as they were abroad.

In a national council session of the Awami League on February 14-16, 1981, Sheikh Hasina was elected party president.