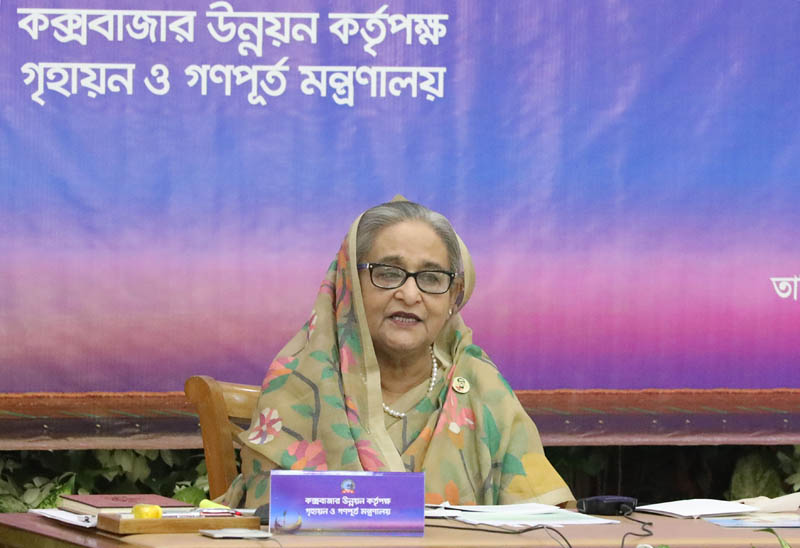 DHAKA, May 18, 2022 (BSS) - Prime Minister Sheikh Hasina today urged all not to build indiscriminate establishments in Cox's Bazar, saying her government is implementing projects to ensure its overall development maintaining natural beauty to make it a major global tourist destination.

"It is solely needed to build Cox's Bazar as a global tourist city. So, I request all particularly the inhabitants of Cox's Bazar not to construct establishments in an unplanned way," she said.

She said this while inaugurating a newly constructed eco-friendly multi-storey office building of the Cox's Bazar Development Authority, joining virtually from her official Ganabhaban residence here.

The Ministry of Housing and Public Works and Cox's Bazar Development Authority jointly organised the function at Beer Muktijoddha Playground in Cox's Bazar.

The prime minister said she had already instructed to prepare a master plan to ensure planned development surrounding the Cox's Bazar following the international standard to attract both foreign and local tourists.

"We will have to take development programmes for Cox's Bazar beach, not only with bricks and woods, but rather to integrate nature, environment and biodiversity," she said.

Reminding the 1991 cyclone, the premier stressed creating deep tamarisk tree forest along the longest and beautiful beach in the world to protect it from cyclones and tidal surges, saying, "We have to keep in mind the 1991 cyclone."

"If this can be done in a planned way, it will not be tough to create a forest on the 80 miles or 120 kilometres long beach. We must have to protect our environment," she said.

She also emphasised preserving nature to protect people from the natural calamities.

A video presentation on the measures to make a modern and greener Cox's Bazar was screened at the function.


Sheikh Hasina said her government has been working to link Cox's Bazar with other parts of the country side by side development of road, rail and air connections to ensure easy communication facilities for the tourists.

The prime minister said her government has already started flight operations between Sylhet and Cox's Bazar.

"The government is working to launch flight operations to Cox's Bazar, from all the domestic airports such as Barishal, Rajshahi and Syedpur in phases," she added.

The Cox's Bazar International Airport will be refueling hub of the East and the West bound aircrafts due to its geographical location, she said, adding that once the refueling place was in Hong Kong, then Thailand, Singapore and now Dubai.

"But actually Cox's Bazar will be the place of refueling for the international air traffic," she stated.

The premier said that her government has already constructed Dhaka-Chattogram Highway and is building Chattogram-Cox's Bazar Highway, which is going on in full swing.

She said the construction work of much awaited rail link from Dohazari, in Chattogram to Gumdum in Cox's Bazar is underway.

"We are constructing the rail link from Chattogram for smooth transportation of the people to the tourist city and the works will be completed soon," she said.

She mentioned that her government has already built a marine drive from Cox's Bazar to Teknaf and is planning to expand up to Chattogram, saying, "We have taken programmes to this end."

The prime minister said her government would build the country's best ever international convention center in Cox's Bazar.

She continued: "I want to do that in Cox's Bazar, not in any other place even in the capital city. It will attract tourists and will be the best place to hold international seminars."

The prime minister said they have built an international cricket stadium in Cox's Bazar and is set to construct a football stadium and others for holding international tournaments there.

In addition to the measures, she said her government has been taking every possible measure to attract foreign and local tourists in large numbers.

The premier said they have built flats at Khurushkul for sheltering the climate refugees who were displaced by the 1991 cyclone.

She added that her government is also going to build a modern dry fish hub for them (climate refugees) as most of them are fishermen.

Sheikh Hasina stressed the need for conducting research on the marine resources to use it in the national economic development after Bangladesh had won a vast sea area from neighbouring countries through legal battles initiated by her government.

She said her government has constructed Bangabandhu Sheikh Mujibur Rahman Maritime University alongside marine academies aimed at building an efficient work force to tap the potential of the blue economy.

The prime minister said the government has built Bangladesh Oceanographic Research Institute and is planning to construct a sea aquarium which requires huge money and skilled manpower.

Mentioning that Bangladesh has a lack of skilled manpower to run a sea aquarium, she said her government is taking measures in this regard.