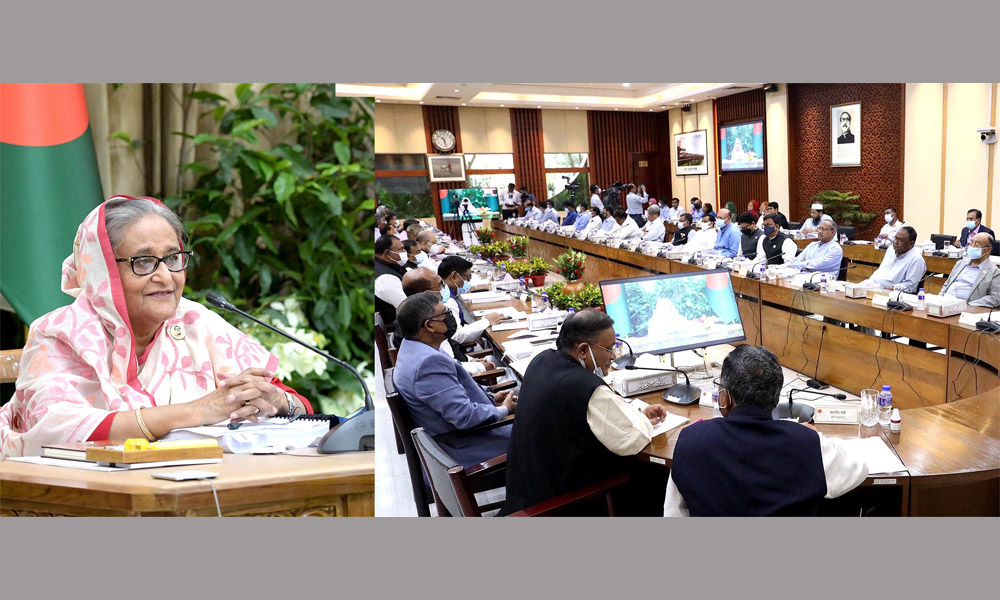 Briefing reporters after the meeting, Planning Minister MA Mannan said that out of the original ADP outlay of Taka 2,46,066.09 crore for the next fiscal year, Taka 1,53,066.09 crore will come from the local sources while the rest of Taka 93,000 crore as project assistance.

However, considering an allocation of Taka 9,937.18 crore against the autonomous bodies and corporations, the overall ADP allocation for the next fiscal reached Taka 2,56,003.27 crore.

Some 1,435 projects are in the new ADP including some 1,244 investment projects, some 106 technical assistance projects and some 85 projects to be financed from the own fund of the autonomous bodies and corporations.

Revealing some of the directives from the Premier at the NEC meeting, the planning minister said that the Prime Minister had urged all concerned including the private sector to pursue austerity in using utilities like water and electricity.

"We'll have to maintain austerity and we should not misuse anything. Although we must be careful, but we're absolutely right on track. We've enough confidence that we'll be able to maintain our growth momentum," he said.

Mannan said that the Prime Minister in the meeting had asked the concerned ministries and divisions to undertake those projects on priority basis which deemed very much necessary for the people and also for the country.

He said the Premier had directed them to check misuse of public fund in all tiers of government machinery.

The planning minister said the meeting was informed that the construction work of the Padma Multipurpose Bridge project is at the final stage while with the completion of the Padma Bridge Rail Link project, connectivity of the southern region with the other parts of the country would be further enhanced and thus dynamism would be infused in the economy.

He said once the Padma Bridge rail link project is completed, it would facilitate transportation of goods to and from Payra Port.

About the implementation of the mega projects, he informed that the Padma Bridge would be opened to traffic this June as the Prime Minister would officially inaugurate the movement of traffic.

Besides, the work on the Rooppur Nuclear Power Plant project is right on schedule, the minister added.

Answering to a question, Mannan said since the Awami League government is a pro-people government, it always works for ensuring the welfare of people and also tries to appease the commoners.

Asked about the possible measures of the government in the next fiscal year considering the global volatile condition, he said that the government would definitely try to make the necessary expenditure in due time through checking misuse. "We're cautious, but we're not afraid of anything."

Replying to another question, the planning minister said that the flow of foreign loans to Bangladesh would not face any disturbance in the coming days.

State Minister for Planning Dr Shamsul Alam said that in recent times a qualitative change has been brought in the project formulation and approval process as they are now undertaking projects through more cautious manner and thorough scrutiny.

He said although the number of projects in the new ADP has been reduced in line with the government's plan, but the overall ADP allocation has been increased.

Planning Commission Member Mamun-Al-Rashid said that considering the pandemic situation and the performance of the Ministry of Health, its allocation in the fresh ADP witnessed a rise of 12 percent.

The planning minister said at the very outset of the meeting, the NEC congratulated the Premier on her homecoming day.

Besides, the NEC also extended its thanks to the Prime Minister for the sound COVID-19 management in the country with limited resources as well as propelling the country towards attaining a healthy growth during that tough time of the pandemic last year.

The NEC meeting also thanked all concerned related to the health sector including doctors, nurses, paramedics and other officials and employees for their relentless efforts during the tough time of the pandemic.

Out of the 15 sectors, the transport and communication sector witnessed the highest ADP allocation of Taka 70,695.52 crore in the next fiscal year followed by the Power and Energy Sector Taka 39,412.36 crore, the education sector Taka 29,081.38 crore, the health sector Taka 19,277.87 crore.