No alternative to Sheikh Hasina to eliminate communal force: Hasan 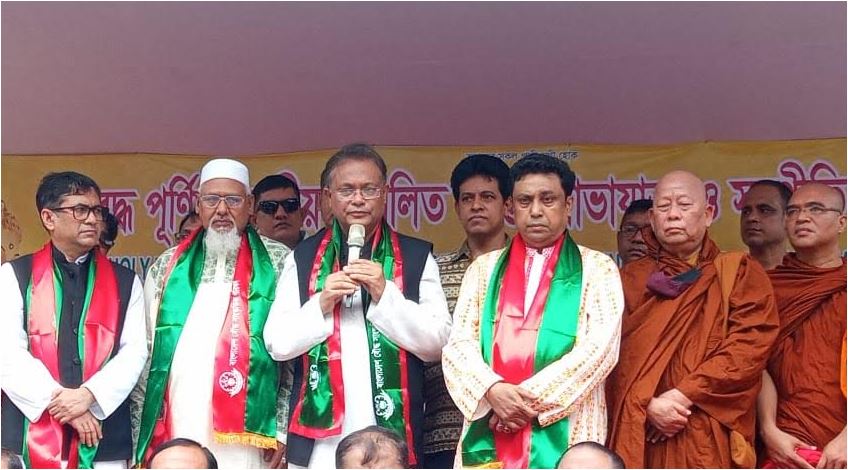 DHAKA, May 14, 2022 (BSS) - Information and Broadcasting Minister Dr Hasan Mahmud today said there is no alternative to Prime Minister Sheikh Hasina, daughter of father of the nation Bangabandhu Sheikh Mujibur Rahman, to eliminate the communal evil forces from
the country.

"Some hidden communal forces sometimes seem to come to the fore and conduct their evil activities in the country. To eliminate the evil forces, there is no alternative to Bangabandhu's daughter Sheikh Hasina," he said.

Hasan, also joint secretary of Awami League, said, "The religious festivals do not always remain limited to the people of respective religion rather people of all religions participate in it and thus, the festivals became a part of our culture."

He said the state was created under the leadership of Father of the Nation Bangabandhu Sheikh Mujibur Rahman in exchange of blood of the people of all religions coming out from the communal state system of Pakistan, said Hasan.

"But through the assassination of Bangabandhu in 1975, the non-communal spirit was destroyed and the poison of communalism was spread in the state as well as attempts were made to turn the state into a communal one," he added.

However, soon after Bangabandhu's daughter Sheikh Hasina came in power in 1996, she took a number of initiatives to bring back the non-communal spirit on the basis of which the state has been created in exchange for the blood of all, Hasan furthered.

Hasan said Bangabandhu's daughter Sheikh Hasina is not only a symbol of the spirit of liberation war, democracy, development and progress rather she is also a tangible symbol of non-communal consciousness.

While addressing the function, state minister for religious affairs Md Faridul Haque Khan said in the constitution of 1972, Bangabandhu ensured freedom of religion and thus, he brought the word secularism in the constitution creating an opportunity for the people of all religions to observe their respective religion smoothly.

"Non-violence is the essence of Buddhism which is also the essence of all religions. I think there would be no animosity among the people over religions if everyone can hold this ideology," he added.