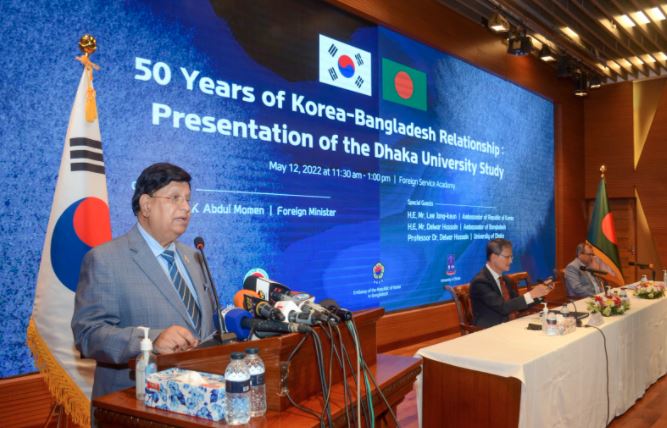 "While we (Bangladesh and South Korea) are observing the 50 years of
bilateral relations, our South Korean friends may let us know how we do
better in ease of doing business," he said.

Improvement in easing doing business is one of the challenges in implementing
Dhaka's economic diplomacy ahead of Bangladesh's formal graduation to middle-
income country status from the least developed countries (LDC) group by 2026.

The minister was addressing a seminar titled, "50 years of Korea-Bangladesh
Relationship" at the foreign service academy that showcased and discussed the
study of Dhaka University on the past, present and future of the Korea-
Bangladesh relationship in various areas of cooperation.

In his speech, Dr Momen also urged Seoul to share their knowledge in the
completion of development projects in due time as South Korea is globally
ranked as the number one country in 'completion of contracts' while delay in
project completion is a common phenomenon in Bangladesh.

The foreign minister thanked the South Korean government's humanitarian
support for the distressed Rohingyas and also for support at various
international forums, including the UN General Assembly on this issue.

Momen noted that South Korea has a very good relationship with Myanmar as in
the last few years the Korean investment package in Myanmar has been pretty
significant.

Considering this, the foreign minister urged South Korea to take an extra
initiative to put active action so that displaced Rohingyas can return to
their homeland in Myanmar soon.


"You (South Korea) have some leverage on Myanmar, therefore, I request you to
use that leverage (on Myanmar for Rohingya repatriation)," Momen said.

The minister said on the occasion of the 50th anniversary of bilateral
relations, Dhaka is keen to elevate the ties with Seoul to new heights,
forging a deeper comprehensive economic partnership based on common
priorities with long-term perspectives.


"As we cross the milestone of fifty years of friendship, I am confident that
together we can build a peaceful and prosperous future for all," he said.


Noting that South Korea is one of the major trading partners of Bangladesh
with 1.5 billion US dollars in bilateral trade, Momen appreciated the South
Korean government for preferential market access to Bangladeshi products
covering 95 per cent of tariff lines.


"We hope that the South Korean government would continue to extend
preferential market access to our products even after 2026 so that bilateral
trade may continue to grow with a favourable balance of trade between our two
friendly countries," he said.

He said Bangladesh is one of the largest recipients of the South Korean soft
loan as a priority partner country for ODA and hoped to remain a priority
partner country even beyond its formal graduation to a developing country in
2026.

Momen said Korea is the fifth-largest FDI source country for Bangladesh with
an accumulated FDI stock of over US$ 1.3 billion while currently, more than
150 Korean companies have a significant presence in Bangladesh.

Besides, he said, Bangladesh authorities and South Korean private investors
have selected four infrastructure projects worth over US$ 10 billion for
implementation under the PPP model.

"We are hopeful that South Korean private investments in our infrastructure
sector would further improve our economic landscape to tap the potentials
beckoning us beyond 2026," he said.

The foreign minister said Dhaka highly appreciates South Korea's recent
adoption of a climate roadmap to reduce the carbon intensity of its economy
and its commitment to helping the developing countries in their transition to
low-carbon economies.