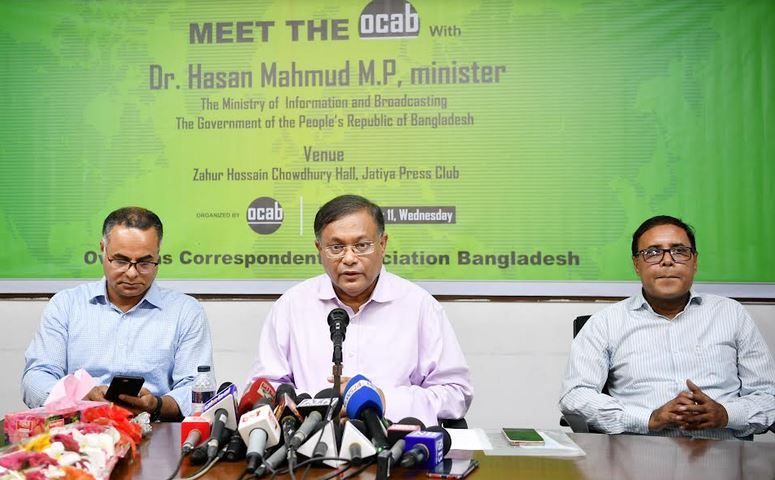 DHAKA, May 11, 2022 (BSS) - Information and Broadcasting Minister Dr Hassan Mahmud today called upon the representatives of Overseas Correspondents Association Bangladesh (OCAB) to project the country accurately in the foreign media.

Describing the OCAB's important role to portray the country in the world media, the minister said the OCAB can expose Bangladesh's overall development before the world as the heads of various international organizations, including the United Nations, heads of state of different countries and the world's media have lauded Bangladesh's unprecedented progress in various fields over the last decade.

On the other hand, Dr Hasan also talked about the role of the Amnesty
International, Reporters Without Borders and Transparency International,
saying, "Amnesty International, a biased organization talks against Bangladesh, doesn't protest against the killing of innocent Palestinian children by the Israeli army through brushfire responding to the hurling of children's brickbats."

In Bangladesh, he said, BNP-Jamaat alliance killed over 100 people through arson attacks, including hurling petrol bombs, but those organizations did not raise voice, rather they called for halting the trial of war criminals those who committed crimes against humanity.

Through their controversial activities, they have lost their credibility, Dr Hasan added.

Criticizing their activities, the information minister said in Afghanistan women are being killed for reporting, the media has to quit women folk and no opportunity for journalism there, but the 'Reporters Without Borders' has proved that their free media index and reporting are malicious by showing Bangladesh's position behind them.

About Transparency International of Bangladesh (TIB), the minister said at the same time the TIB has already lost its difference with the political party through its statements on all issues.

Replying to a volley of questions, the minister boldly said, "I think the freedom enjoys by the Bangladeshi media is an example for many developing countries. In the UK, if there is a false or untrue report against someone, a lawsuit is filed and the media is fined. An entire BBC team had to resign for broadcasting false news against an MP. Even three months back, many of the BBC had to resign due to a misreporting.

Hasan said, in 2011, the 167-year-old newspaper named “News of the World” was fined a huge amount on charge of misreporting by a court, causing to wind up the company after being bankrupted.

The minister said that such kind of scenario has never been happened in Bangladesh, though it was seen even in continental Europe too.

Highlighting the incumbent government’s different promotional activities since Prime Minister Sheikh Hasina bestowed upon him the responsibility of the Ministry of Information and Broadcasting, he said, “Our relentless efforts are still continuing to protect the interest of journalists,  develop meaningful media, ensure the freedom of press and uphold dignity of journalists community and journalism by taking tough steps against the fake and ‘so called’ journalists or newspapers.”

OCAB convener Qadir Kallol of BBC Bangla, member secretary Nazrul Islam Mithu of German Press Agency, and representatives of AP, Deutsche Welle and Xinhua, among others, were present there.

Highlighting the recent activities and achievements of the Ministry of Information and Broadcasting, Hasan said that at his initiative, the law regarding ad-free (clean feed) broadcasting of foreign TV channels was implemented.

He said taxation has been imposed on broadcasting of the advertisements those were made aboard by foreign artistes to the greater interest of local industries and artistes.

The ministry has prevented more than Taka 1 thousand crore per year from smuggling and loss through a number of mobile courts conducted from January 1, 2020 aimed at eradicating illegal dish TV, he added.

He also mentioned other steps such as policy formulation on over-the-top (OTT) platform management, the draft of the Mass Media Employees (services and conditions) and broadcasting Act, providing assistance to media workers from the Journalist Welfare Trust under the sincere patronage of the Prime Minister amid coronavirus situation.

The AL joint general secretary also focused on other steps including setting up a soft loan of Taka 1,000 crore for construction and renovation of cinema halls caused damages by the corona situation, increasing of government grants for films and giving instruction to the Press Council to create a database for journalists.

The Information Minister termed the launching of similar broadcasting of Akashvani on Bangladesh Betar as one of the important achievements of the Ministry of Information and Broadcasting.

Delineating about the Digital Security Act, he said, it was made to prevent an individual from tarnishing of image, gossip and violence.