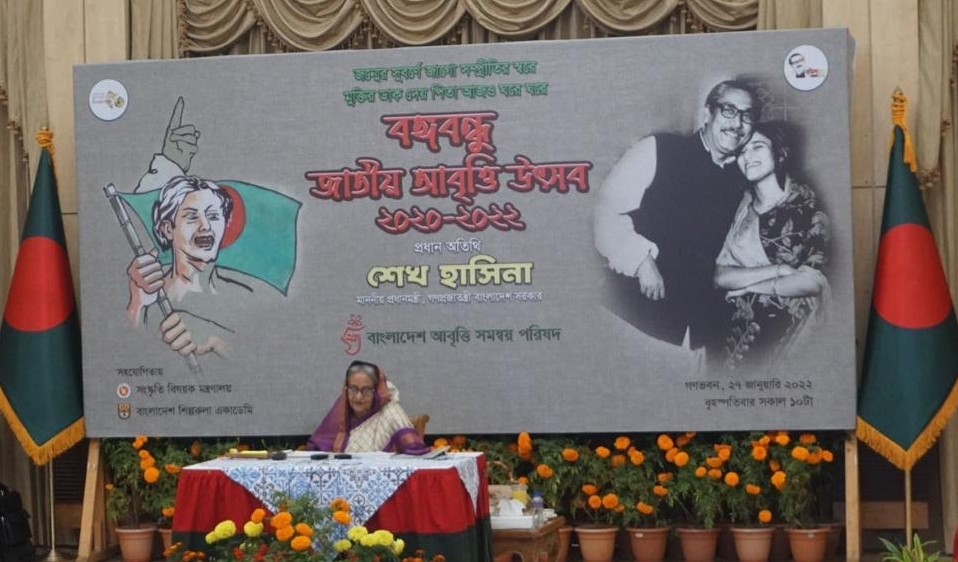 "After August 15, 1975, when political activities were not possible at all, the protest language was uttered by our poetry and people were inspired by those poetries," she said.

She also pointed out that nothing else can inspire people to protest as much what can be possible to do through the practice of poetry, song, drama and culture.

She joined the function virtually at Shilpakala Academy in the capital from her official residence Ganabhaban.

Sheikh Hasina noted all of us know that how much strength the poetry has as in the way the anti-British movement had progressed through the drama “Neel Darpan”.

"We have been attacked many times, but the Bangalees did not sit down idle rather protested every time," she said, adding, “. . . whatever poet, artist, writer, reciter had given us, those are our resources.”

After the assassination of Father of the Nation, the prime minister said the poets and reciters of this country have contributed the most to each movement, expressing her profound gratefulness to everyone in this connection.

Without mentioning anyone’s name, Sheikh Hasina said many people at that time had written, performed in drama, authored literature, printed books, and even had to be arrested for staging protest “but none didn’t stop”.

Referring to the infallible power of the poetry, she said, "When we started the movement against the dictatorship, we had to go through many dramas, poems and recitations."

She, however, said there had been many obstacles and the poetry festival of that time had to be organised through many barriers.

Sheikh Hasina said the nation witnessed the first blow on its culture and language soon after the emergence of Pakistan and so, the struggle for making Bengali as a state language started in 1948.

Mentioning the leading role of Father of the Nation Bangabandhu Sheikh Mujibur Rahman in the Language Movement, she said the great leader, who was then a law student of Dhaka University, protested the attacks on Bengali language, formed Chhatra League and Bhasa Songram Parishad taking with student leaders and Tamaddun Majlish, and called for the movement.

She said Bangabandhu with many others was incarcerated during the 11th March strike in 1948.

“Attacks had been orchestrated time and again, but Bangalee did not sit idle rather protested these,” said Sheikh Hasina.

The premier said it was her habit to visit the poetry recitation or festival and enjoy those sometimes staying far away or even sitting in the car.

"Many untold stories are spoken through the poem, and in many struggles, the path is shown,” she added.

She opined that a politician deliver address in many places, but the appeal of cultural practice is much more than the lectures. "People are more motivated by what I say that by a poem, song, drama or culture through which the human heart can be touched,” she said.

Referring to the traditional “Kabi Gaan” event in rural Bangla, she said, “In our country, poets used to do debate in the past. In fact, Bangalees are instinctively poets - this is the reality.”

On the inaugural day of the five-day poetry festival organized by Bangladesh Recitation Coordination Council, the two special guests on behalf of the prime minister handed over “Bangabandhu Sheikh Mujib National Recitation Medal 2020-22”.