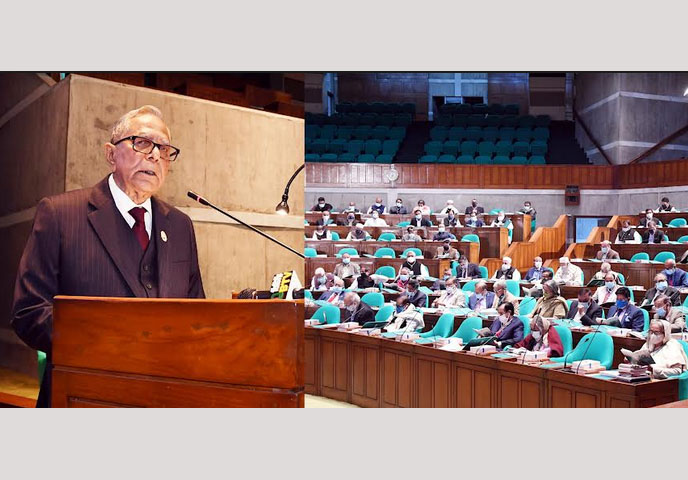 The President made the call as he addressed the New Year's (2022) first session of the 11th Jatiya Sangsad (JS) here.

The head of the state termed the parliament the focal point of people's expectations and said, "People are the source of all power... All public representatives must give priority to the public interests."

He also asked all to work together to build a 'Sonar Bangla' dreamt by the Father of the Nation Bangabandhu Sheikh Mujibur Rahman by eliminating terrorism, drugs, corruption and militancy from the country, achieved at the cost of millions of lives.

As per the parliamentary practice, the current session is the maiden one of the new year, where the President addresses the House every year. Subsequently, detailed discussions take place on his speech with the participation of lawmakers.

But due to COVID-19, this session, like the special JS session on the occasion of Mujb Borsho, will be held in a limited scale maintaining the health rules, said the parliamentary secretariat.

Leader of the House and Prime Minister Sheikh Hasina and parliamentarians of both treasury and opposition benches were present as Speaker Dr Shirin Sharmin Chaudhury chaired the sitting.

The President called upon the treasury and opposition bench members to play their due and effective role in parliament in the greater interest of the country and its people.

"It is our sacred duty to give the new generation a safe, happy, beautiful and prosperous Bangladesh," he added.

Hamid said 2021 was an unforgettable year for the Bengali nation as Bangladesh celebrated its golden jubilee of independence as well as victory day and Bangabandhu's birth centenary, adding: "This celebration gave a greater and international look with many world leaders and heads of the states joining the events physically and virtually.

Noting that peace and stability are prevailing across the country due to the incumbent government's strict policy against terrorism and militancy as a prerequisite to development, he said Sheikh Hasina's government is firm to ensure communal harmony in the country.

Bangladesh is a unique example in the world in terms of communal harmony, the President said, adding, "However, we must be vigilant so that no vicious clique, in the name of religion can destabilize the country."

The President stressed the need for preparing new training curriculum in line with the demand of world market, modernizing existing ones and imparting adequate trainings to create internationally certified skilled manpower.

Referring to the rise in the government's expenditure due to the increased development activities in the last one and a half decades, Hamid instructed all concerned to ensure cent percent execution of the undertaken projects within the stipulated timeframe.

In his address, the President highlighted the overall activities and achievements of the government in various sectors, including economy, trade-investment, food-agriculture (achieving self-Sufficiency in fish, meat and egg production), environment, controlling pollution and climate change affects, power, education, health, good governance, women and child development, women empowerment, rural development, sports and youth development, enhancement of bilateral and multilateral ties, and the tremendous progress in the fields of the information and communication technology (ICT).

Mentioning that under the well-planned directives of PM's ICT adviser Sajeeb Ahmed Wazed, the country is now well-known in the world as a 'Digital Bangladesh', the President said Bangladesh's first satellite 'Bangabandhu Satellite-1' is broadcasting programs on all public and private television channels while the launching of 'Bangabandhu Satellite-2' is in progress presently.

He said Bangladesh, as the ninth country in the world, has entered the era of 5G network since December 12, 2021 and due to its (5G) availability, all the online activities would be more efficient and dynamic.

During the COVID-19 pandemic period, the President said, almost everything including cabinet meetings, court proceedings, offices, business and vaccination activities, have been kept continuing in the digital manner.

"Besides, country's 18,500 government offices have been brought under the internet network and 2,600 unions under the broadband internet through fiber optic cable lines. As many as 8177 digital centres are providing 60 crore services while the world's largest portal 'Jatiya Tathya Batayan' is giving 10 lakh services every day," he told the House.

President Hamid said through e-documents, the dynamism of work has increased in 11,370 government offices and a total of 103 infrastructures are being constructed at Hi-Tech Park, IT Park and Sheikh Kamal IT Incubation and Training Center.

Of these, he said 120 institutions in the meantime invested Taka 570 crore in five infrastructures and two million people have so far got technology-based jobs.

He said the last two years have been marked by a global pandemic that has threatened the people's livelihoods by increasing the economic risk for marginalized people and the private sector as well.

"Due to inspiration, courageous and effective steps of the government led by Prime Minister Sheikh Hasina, Bangladesh is successfully coping with the impact of the lethal diseases," Abdul Hamid said.

He called upon the government to take necessary precautionary measures so that the new variant of Corona Omicron cannot spread the infection in Bangladesh.

In the current situation, compared to the negative GDP growth of most countries in the world, according to the provisional calculations, the GDP growth of Bangladesh in the fiscal year 2020-21 stood at 5.43 percent, which is obviously hopeful, the President told JS.

"As a result of cash incentives and simplification of remittance sending process, the remittance inflow in FY 2020-21 increased by 36.1 percent to 24.78 billion US dollars compared to the previous FY. And due to this, the foreign exchange reserve has increased significantly reaching it to 45.26 billion US dollars," he pointed out.

Hamid added: "Besides, bank loan interest rate has been brought down to single digit to create an industry and business friendly environment."

Referring to the International Investment Conference in Dhaka on 26-29 November 2021, the President said it has created a lot of interest in Bangladesh with US $ 270 crore investment proposals there.

He said a total of 7,325 acres of land has been allotted in favour of 193 investing companies for setting up industries in different economic zones, where the proposed investment would be about 26 billion US dollars, creating employment opportunities for about one million people.

Along with economic development, Bangladesh has made tremendous progress in human development. The average life expectancy is 72.8 years, the child mortality rates under five years and under one year have come down to 28 and 15 per thousand respectively, he mentioned in the speech.

"After the successful implementation of 'Vision 2021', the 'Vision 2041' is being implemented under the 'Bangladesh Delta Plan 2100', which was formulated considering water management and environmental change . . .We want to join the platform of upper-middle income country by 2031 and that of the developed ones by 2041," the President said

At the time of the Fourth Industrial Revolution, he said, Bangladesh has to make full use of the benefits of demographics to build the opportunity and "We have to streamline our education system so that our new generation can adapt to the rapidly changing world."

The head of the state also stressed on looking for new labour markets and manpower exports worldwide.

At the very outset of his address, the President paid tribute to Bangabandhu Sheikh Mujibur Rahman, the greatest Bengali of all time, all valiant freedom fighters and other patriotic souls who had to sacrifice their lives for the sake of the country and nation at different times.