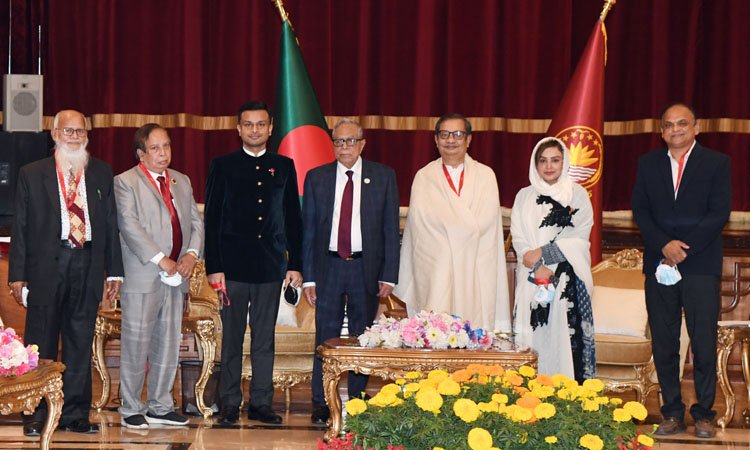 At first, Zaker party took part in the dialogue with the President with a six-member delegation led by party chairman Mostafa Amir Faisal with placing four-point proposals, including the enactment of electoral laws and forming a search committee comprising representatives of registered political parties to give the EC a neutral and acceptable manner.

Their proposals also include using modern technology-block-chain system and e-voting system for ensuring a free, a fair and credible election.

They proposed to form an EC by issuing an ordinance if it is not possible to enact new law.

The leaders also sought all-out cooperation of the Executive in EC activities and to ensure accountability of the Election Commission and the government in line with the Article 126 of the Constitution.

Meanwhile, a six-member delegation led by Bangladesh Jatiya Party (BJP) Chairman Barrister Andaleeve Rahman took part in the dialogue with four proposals, including enacting timely law, forming EC in accordance with the Constitution and involving armed forces as a collaborating force in the electoral process.

Welcoming the delegations in the talks, the President said elections are an important process in a democratic manner and the role of the Election Commission is very important to ensure a free, fair and acceptable poll.

The valuable opinions as well as recommendations of the political parties with regarding this would play a fruitful role, the Head of the State hoped.

President Hamid sought a very proactive role of the country's political parties to create conducive environment in politics and motivate the voters to ensure fair and credible polls.

Ruling party Bangladesh Awami League is scheduled to hold a dialogue with the President on January 17 (Monday) at 4 pm.

Earlier, a dialogue was held with the participation of political parties ahead of the ninth, 10th and 11th parliamentary elections.

The President has been given the power to appoint CECs and more than four Election Commissioners.

In the last few terms, the President formed the EC on the basis of the recommendations of the Search Committee.

The current EC's five-year tenure would expire on February 14 this year.

During this period, the President will form a new EC, under which the 12th Jatiya Sangsad (JS) elections to be held.