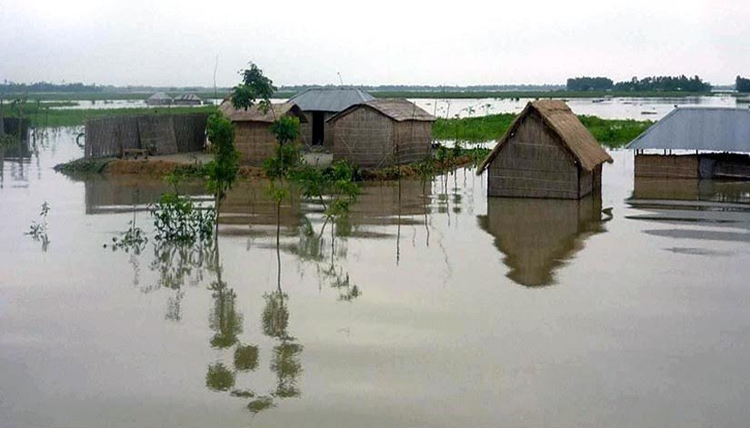 RANGPUR, Sept 6, 2021 (BSS)–Floodwater continued receding from the inundated low-lying areas further improving the flood situation in the Brahmaputra basin during the last 24 hours ending at 9 am today.

Bangladesh Water Development Board (BWDB) officials said water levels of all major rivers marked further sharp falls at all points following the continuous recession in the rate of onrushing water from the upstream during the period.

Water levels of major rivers were flowing above the danger level (DL) at only four points in the basin today.

Incidents of sporadic riverbank erosion are being reported from more areas alongside major rivers in Kurigram and Gaibandha districts.

“Riverbank protection works are continuing at some vulnerable points in the basin where the flood situation may continue to improve during the next 72 hours,” Chief Engineer for Rangpur Zone of BWDB Jyoti Prosad Ghosh told BSS.

“All flood control embankments and structures are remaining safe in the flood-affected areas while some sporadic incidents of riverbank erosion are being reported amid strong river current with the recession of floodwater,” Engineer Ghosh added.

According to a bulletin of the Flood Forecasting and Warning Center (FFWC) of BWDB, water levels of the Brahmaputra-Jamuna river systems are in a falling trend which may continue in the next 72 hours.

“The flood situation at low lying places of Kurigram, Gaibandha, Jamalpur, Bogura and Sirajganj districts may continue to improve further during the next 24 hours,” the bulletin added.

Additional Divisional Commissioner (General) Md Zakir Hossain said relief activities are continuing among the flood-hit people of the affected districts in Rangpur division despite improving flood situation during the past couple of days.

Executive Engineers of BWDB Ariful Islam for Kurigram and Mokhlesur Rahman for Gaibandha said riverbank protection works are continuing in full swing at a few vulnerable points alongside the major rivers in these two districts.

Officials of the Department of Agricultural Extension (DAE) said floodwater already started receding from submerged crop fields on over 30,000 hectares of land in low-lying areas of the Rangpur agriculture region alone.

The extent of crop damages would be less as floodwaters continue receding fast from submerged croplands in Rangpur, Kurigram, Gaibandha, and Lalmonirhat districts.