Book on ‘Mainstreaming SDGs for the Ministry of Industries’ unveiled 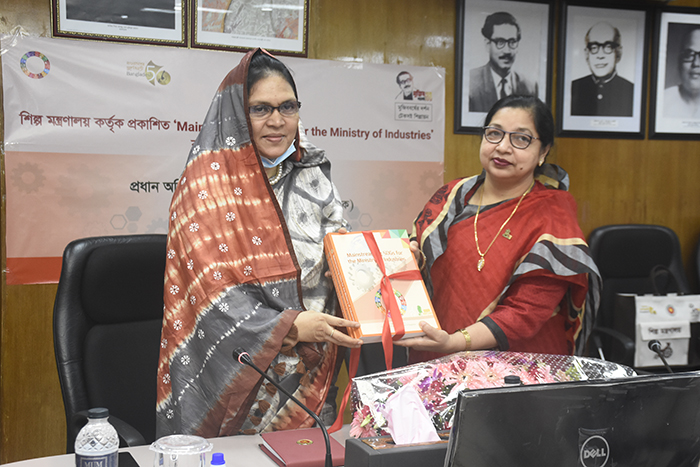 DHAKA, Sept 05, 2021 (BSS) - A book on ‘Mainstreaming SDGs for the Ministry of Industries’ was unveiled today with a call for achieving the Sustainable Development Goals (SDGs) by 2030.

Principal Coordinator for the SDG Affairs Zuena Aziz unveiled the book as the chief guest at a function at the Industries Ministry conference room in the city while Industries Secretary Zakia Sultana presided over the function, said a press release.

In her speech, Zuena Aziz said the government is moving forward to materialize the dream of Father of the Nation Bangabandhu Sheikh Mujibur Rahman by building a poverty-free prosperous Bangladesh.

For achieving the SDGs by 2030, she said, Bangladesh has to utilize the huge population in the field of increasing production.

She said that this publication of the Ministry of Industries on SDGs is really commendable.

Of the 39 national priority targets in the Ministry of Industries, she said, two are working to increase industrial employment to 25 percent and another to 35 percent of GDP.

For the first time in Bangladesh, she said, Industries Ministry has published the book on SDG.

She informed that the publication has included the issues of the Ministry's Annual Performance Agreement (APA) and Election Manifesto 2018 with SDG.

She mentioned that the book published by the Ministry of Industries on SDGs would serve as a guideline for all stakeholders in sustainable industrialization in Bangladesh.