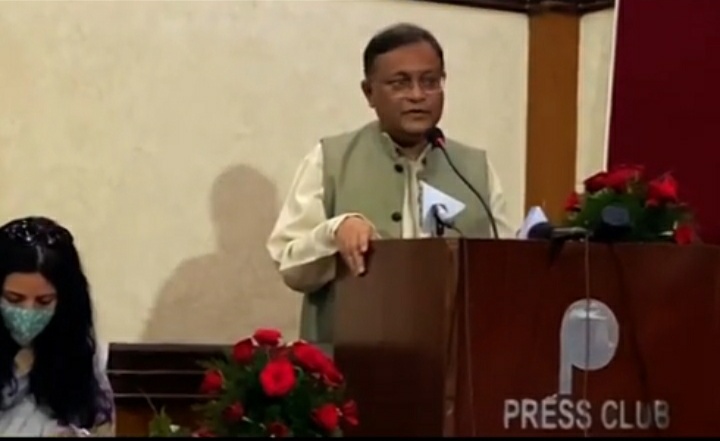 “Definitely, the media centre will help strengthen relations between the two countries and help know Bangabandhu Sheikh Mujibur Rahman and about his struggle for the betterment of oppressed humanity,” he said.

The minister was inaugurating the much-desired “Bangabandhu Media Centre” at the Press Club of India (PCI) here this afternoon as the chief guest.

The media centre was set up at the first floor of the club building with support of Bangladesh New Delhi mission in honour of Father of the Bengali Nation Bangabandhu Sheikh Mujibur Rahman.

The minister said the bilateral relations between the two countries reached a newer height during the tenure of Prime Minister Sheikh Hasina and her Indian counterpart Prime Minister Narendra Modi.

“Although the relationship reached a newer-height, still we have to work for further increasing people to people and journalists to journalists contacts in  greater interest of both the nations”, he added.

In this connection, he gave a brief description of all the democratic struggles of Bangabandhu, his sacrifice for welfare of the oppressed people and his movement towards achieving an independent Bangladesh free from Pakistani occupation forces.

Regarding India’s support for Bangladesh’s independence movement, he said, “It will never be possible to liberate the country (Bangladesh) from Pakistan during the nine-month war without the help of India and its people.”

Besides, he said along with the Indian government, the people of India had played a vital role for Bangladesh’s War of Independence in 1971. They gave shelter to 10 million Bangladeshi refugees, he mentioned with gratitude.

In this regard, the minister expressed his gratitude to the Indian government and people of India for their whole-hearted support to Bangladesh’s Independence Struggle in 1971.

Speaking on the occasion, Bangladesh High Commissioner to India Muhammad Imran referred to the role of Indian journalists to Bangladesh War of Independence saying that their roles were crucial to let the outer world know about the 1971 War in Bangladesh.

manifold in the recent years due to better connectivity and flexibility of visa procedure.

In this connection, he said a good number of Indian people have been working in Bangladesh’s manufactures and service sectors and contributing a lot to the country’s development endeavours.

Besides, over two million Bangladeshi people are visiting India every year for tourism and medical purposes, he added.

Therefore, he said, the high commission is planning to set up such more centres after the name of Father of the Nation Bangabandhu Sheikh Mujibur Rahman in different places across India that would be used as recourse centres.

About the opening of “Bangabandhu Media Centre” at PCI, he hoped that the centre would be used as a resource centre and to know the legacy of Father of the Nation Bangabandhu Sheikh Mujibur Rahman and the recent development of Bangladesh.

“It (Bangabandhu Media Centre) will stand as a milestone of our journey towards our strong relations with Indian journalists,” the envoy added.

Later, a Memorandum of Understanding (MoU) between Bangladesh High Commission and Press Club of India (PCI) was signed to this end.

Secretary General of the club Vinay Kumar and Minister (Press) of the mission Shaban Mahmood signed the agreement on behalf of their respective sides.

Earlier, the minister paid tribute to Father of the India Mahatma Gandhi at Raj Ghat by placing floral wreaths at the Samadhi of the Legendary leader in the Sub-Continent. He also visited Rashtriya Swachhata Kendra at Raj Ghat.

The “Bangabandhu Media Centre” set up at the Press Club of India (PCI) will have modern digital facilities including an exhibition hall and library.

A documentary on Father of the Nation Bangabandhu Sheikh Mujibur Rahman was screened on the occasion.