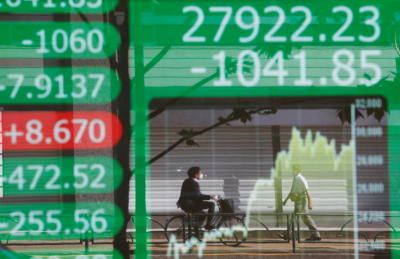 recent gains Tuesday as they tentatively assessed the global outlook against
the backdrop of rising Delta coronavirus cases and signs of a slowdown in the
economic recovery.

Tokyo's Nikkei 225 briefly broke 30,000 for the first time in five months on
growing expectations for a fresh injection of stimulus after Japan's prime
minister said he would step aside, paving the way for a new big-spending
successor.

The blockbuster growth that characterised the start of the year has tailed
off in recent months as the Delta variant sends new infections spiking around
the world, tempering consumer spending and forcing some countries to impose
strict containment measures.

However, several markets have continued to press to new records or multi-
year highs owing to the ultra-loose monetary policies of central banks around
the world -- particularly the US Federal Reserve -- that have kept borrowing
costs down.

While there is a general expectation that that largesse will come to an
end soon as economies emerge from the pandemic crisis, officials have
indicated they are in no rush to taper just yet as they track the impact of
Delta.

And Friday's massive miss on US jobs creation provided a big boost to
markets as it meant the Fed's planned policy tightening will not likely start
until November or December, instead of the September that had been suggested.

"The Delta -- and possibly other -- variant(s) remain a cause for concern
as the disease is spreading rapidly through unvaccinated communities and the
efficacy of the 2021 vintage of vaccines is being questioned," Chris Iggo, at
AXA Investment Managers, noted.

"I don't think the recovery and growth outlook is negated by this but
there could be some 'air-pockets' in the data and in investor sentiment."

With US traders off Monday for a public holiday, Asia had few catalysts
but Hong Kong, Shanghai, Manila and Jakarta all posted gains.

Sydney, Seoul, Singapore, Wellington and Taipei edged down, though.

Tokyo continued to thunder higher on stimulus hopes, and a reshuffle of
the Nikkei 225 also provided healthy support.

The gauge is up more than four percent since Thursday's close, before
Prime Minister Yoshihide Suga said he would step down and sparked speculation
about who would take his mantle.

Investors are awaiting the release of Chinese trade data later in the day,
which will provide the latest snapshot of the world's number two economy and
a key driver of global growth as its recovery stumbles.