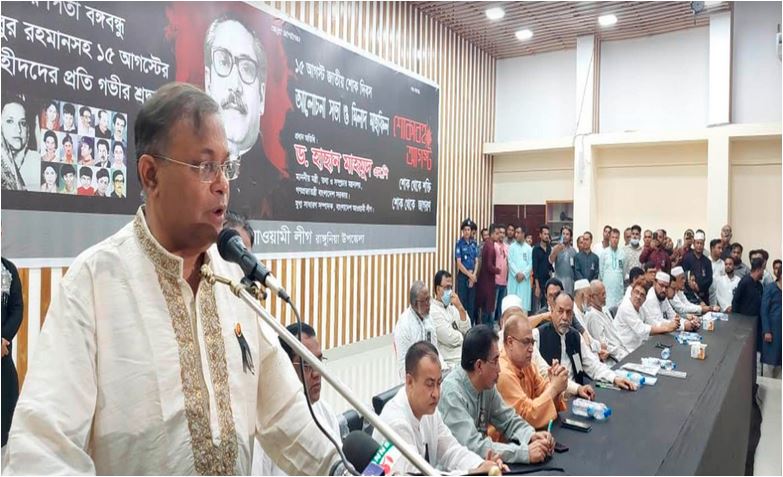 CHATTOGRAM, August 13, 2022 (BSS)- Urging all to remain alert, Information and Broadcasting Minister Dr Hasan Mahmud today said petrol bomb terrorists of BNP are back in the field and everyone would have to resist and drive out them (terrorists).

“We have never obstructed BNP’s rally and we won’t it. But they fight themselves. If we see petrol bomb terrorists, then we will not sit idle. We will resist,” he said.

Hasan said BNP is now making tall talks staging different agitations due to fuel price hike. But the fuel price has increased about two times across the globe after the Russia-Ukraine war, he said, adding the price of fuel is now 170 US dollars which was 60 US dollars.

He said the prices of fuel will be adjusted if the price will reduce steadily in the global market.

He said bombs were blasts at 500 places across the country during the BNP’s regime on August 17 in 2005. Protest rallies will be held on August 17 at union levels across the country protesting BNP’s anarchy and anti-state conspiracies and the AL leaders and activists of Ranguniya will also take part in the rally, said Hasan, also Awami League joint general secretary.

In his speech, the minister paid rich tribute to Father of the Nation Bangabandhu Sheikh Mujibur Rahman.

He said Ziaur Rahman and his family were the most beneficiaries of Bangabandhu’s assassination. The accused and witnesses of the Bangabandhu killing case have clearly stated that how and when they met with Ziaur Rahman and how he (Zia) was involved in the conspiracy, he added.

Even later, he said, Khandakar Mostaq made Zia as the chief of army.