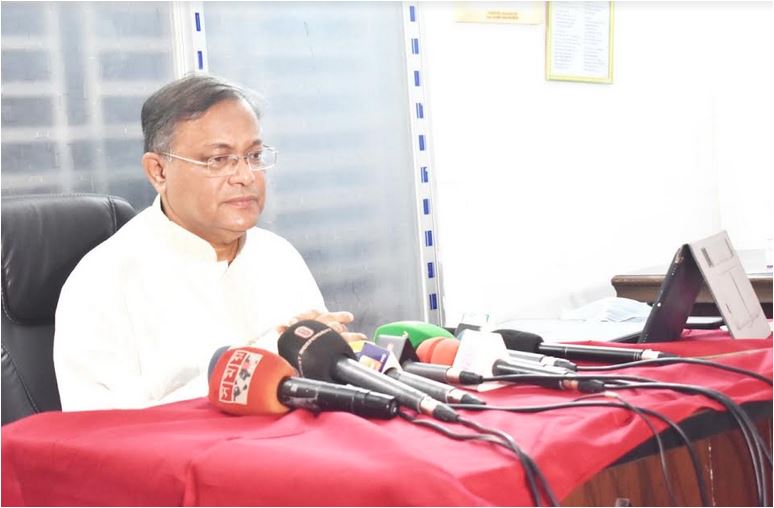 CHATTOGRAM, July 2, 2022 (BSS) - Information and Broadcasting Minister Dr Hasan Mahmud today said the BNP has become habituated to talk in indecent ways on any crisis of the country.

He said when the people of the country are happy that the Padma Bridge has been built, the BNP has become speechless and can't understand what they would say after opening of the Padma Bridge.

“When people are condemning the BNP and those who have conspired against the Padma Bridge, they have lost their temper talking nonsense,” he added.

The minister was responding to various questions from reporters at a press briefing in his city’s Dewanipukur residence this noon.

Maqbool Hossain, Secretary of the Ministry of Information and Broadcasting, addressed the function as special guest.

Talking about BNP leader Rizvi Ahmed’s comment on singing in Parliament about the Padma Bridge, Dr Hasan replied that AL leaders and workers reached the flood affected people first as per the directives of the Prime Minister.

He said Rizvi was missing for a few days, he suddenly came out and now he is talking about various things.

Regarding the comments of BNP leader Gayeshshor Chandra Roy that the BNP will not thank the government for the corruption in the Padma Bridge, Dr Hasan said people all over the country are rejoicing because of inaugurating the Padma Bridge.

“When the people of the country are condemning the BNP and those who have conspired against the Padma Bridge, they are losing their temper and making all sorts of contradictory statements," he added.

AL joint general secretary said, the government and party leaders and workers have come to aid the people after floods. “They stood by them in the past and will do so in the future too,” he said.

On the other hand, he said, the BNP never goes to the people in crisis but does politics with them, he added.

"Even after the floods, our party leaders have stood by the affected people there," he said.

He said one AL leader informed that his residence's ground floor was under water and his family members were shifted to the first floor and gave shelter people on the second floor.

He is also providing foods to them,  Hasan added.

The Information and Broadcasting Minister said no one from the BNP went there after the floods and the BNP said it was not their duty to provide relief.

“When we were in the Opposition, the AL has always stood by the victims of various calamities including floods and tidal surges,” he said.

Responding to questions from journalists Hasan said the government would take legal action against those who opposed the Padma Bridge from Bangladesh.

The minister said the High Court had a verdict, It has been asked to form a commission to find out those who have conspired against the Padma Bridge. The government will consider what can be done after examining the High Court verdict, he added.