Profile of the Minister 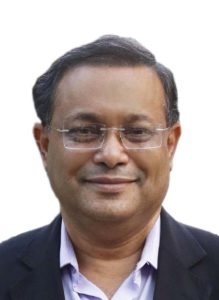 Ministry of Information and Broadcasting

Govt. of the Peoples Republic of Bangladesh

Minister, Ministry of Information and Broadcasting

Government of the People’s Republic of Bangladesh

Member of the Parliament, (Constituency- 284, Chattogram- 07)

Chairman, Standing Committee on Ministry of Environment, Forest and Climate Change, (January 2014 to 2019)

Former Minister, Ministry of Environment & Forest, Government of the People’s Republic of Bangladesh (August/2009 to January/2014)

Former State Minister, Ministry of Foreign Affairs, Government of the People’s Republic of Bangladesh (2009 to August/20009)

Dr Hasan Mahmud, MP is a well-known environmentalist both in home and abroad. He was awarded with the “Certificate of Honorable Mention” by Green Cross International”- an Environmentalist organization for his strong role of global climate change. As the President of Parliamentary Standing Committee of Environment, Forest and Climate Change of National Parliament he worked very successfully to tackle the country’s environmental and climate threatening issues.