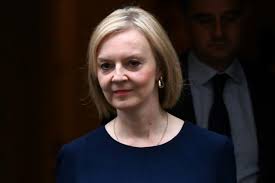 LONDON, Sept 30, 2022 (BSS/AFP) - UK Prime Minister Liz Truss defended her tax-slashing plans Thursday but vowed to "get borrowing back on track", after nearly a week of silence when markets tanked and the Bank of England was forced into an emergency intervention.

"We had to take urgent action to get our economy growing, get Britain moving, and also deal with inflation," she said in an initial round of local BBC radio interviews.

"And of course, that means taking controversial and difficult decisions, but I'm prepared to do that as prime minister," she added, in her first comments to UK media since the crisis sparked by Friday's "mini-budget".

"It's important the United Kingdom's on the front foot, that we are pulling all the levers we can to drive economic growth. That is what we are pushing ahead with."

In a series of further BBC regional television interviews, Truss -- in power for less than a month -- said some aspects of her growth plan "will take time" while insisting "we will get borrowing back on track".

The under-fire leader is facing severe pressure after the markets reacted to her government's contentious plans for extra borrowing to fund uncosted tax cuts by sending the pound to an all-time low against the dollar.

UK markets remain highly volatile, with the central bank intervening on Wednesday to buy government bonds in order to prevent a "material risk" to stability.

After sterling hit its dollar low early Monday, the bank said it would "not hesitate to change interest rates by as much as needed" to curb high inflation.

But it also signalled that it would wait until its next policy meeting on November 3 before fully assessing the impact of the government's contentious plans.

Parliament's Treasury Committee on Thursday called on Chancellor Kwasi Kwarteng directly to publish a fully costed economic forecast by the end of October to help the bank rather than on November 23 as planned.

Opposition leaders have demanded that Truss cancel her Conservative party's annual conference starting on Sunday and recall parliament over the crisis.

Britain's main opposition Labour party has a huge 33-point lead over the ruling Conservatives, new polling out on Thursday suggested, as the government struggles with the fall-out from its economic plans.

YouGov said a voting intentions survey of 1,712 adults carried out on Wednesday and Thursday put Labour on 54 percent compared to the Tories' 21 percent.

Adding to Truss's political woes, signs of unease among Truss's own MPs began to emerge.

Former science minister George Freeman called on the Cabinet to meet and agree a "Plan B".

Another MP, Charles Walker, admitted that his party would likely lose an election if it was called today based on the polling, but ruled out the possibility of a leadership challenge against Truss.

Markets are concerned that Britain cannot fund its huge spending commitments, having announced a massive fuel subsidy package alongside the tax cuts.

Truss defended her fiscal policy, which includes a cut to the top rate of income tax, arguing the UK currently had its highest tax burden in 70 years.

"We've reduced those taxes across the board. And of course people who are better off tend to pay more taxes," she said.

The pound rebounded somewhat during Thursday, rising one percent against the dollar and reaching $1.09, reversing losses the previous day following the BoE's emergency move.

But former BoE chief Mark Carney said the government had "undercut" financial institutions with its actions.

"Unfortunately having a partial budget, in these circumstances -- tough global economy, tough financial market position, working at cross-purposes with the bank -- has led to quite dramatic moves in financial markets," he told the BBC.

But Truss insisted she was working "very closely" with the central bank.

In a highly unusual intervention on Wednesday, the International Monetary Fund said it was "closely monitoring" developments and urged the UK government to change tack.

It noted that Truss and Kwarteng, were trying to deal with the energy shock and boost growth.

"However, given elevated inflation pressures in many countries... we do not recommend large and untargeted fiscal packages at this juncture."

Many central banks, including the Bank of England, are aggressively hiking interest rates in a bid to cool decades-high inflation.