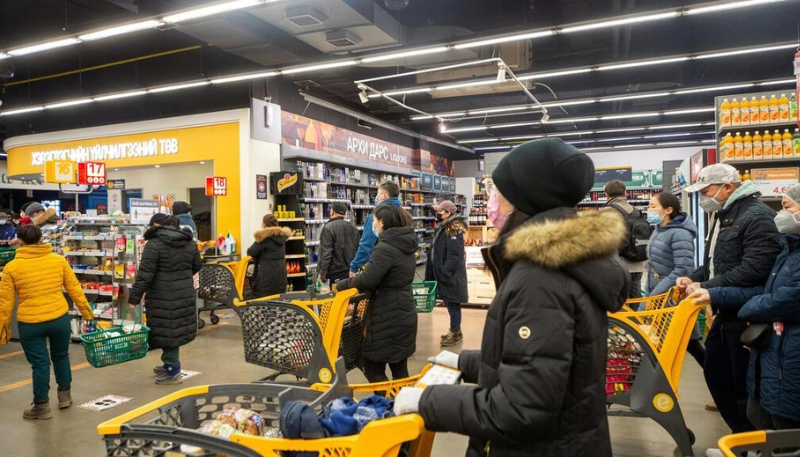 exchange market, elderly women stand in the street waving wads of money at
passers-by, encouraging them to change foreign currency to Mongolian tugriks.

Each transaction nets them a small profit -- but when the value of the tugrik
fluctuates it makes that more difficult, and lately the currency has taken a
dive.

This year the currency has fallen almost 15 percent against the US dollar --
most of that since the start of Russia's invasion of Ukraine.

Angara Banerji, the International Monetary Fund's mission chief, listed a
raft of factors behind the country's inflation, including a rise in domestic
meat prices, China's border restrictions, surging oil and food prices, and an
increase in transportation and logistical costs for imports.

The declining currency has pushed up the cost of everyday goods for a country
struggling to navigate global economic headwinds caused by transportation
bottlenecks and inflationary pressures, war and economic uncertainty.

"The rate is going down dramatically because of the war in Ukraine and the
coronavirus," said Ts. Maisaikhan, a currency trader who operates inside the
market.

"We don't produce much ourselves, most things are imported, so when the
dollar goes up the price of everything goes up too."

Like elsewhere in the world, Mongolia's inflation has soared this year and
reached 14.4 percent in August, compared with 9.5 percent during the same
month in 2021, according to the country's National Statistical Office.

Prices for food and beverages increased by about a fifth on-year in August --
the same rate as medicine and health care -- while the cost of clothing,
utilities and housing also went up.

"Inflation has surged sharply since mid-2021 and has exceeded the Bank of
Mongolia's target band," said Banerji.

Last summer there were a few weeks when potato prices temporarily tripled
after China closed the border over Covid-19.

In a sewing shop near the money exchange, Sukhbaatar Tuya said she buys some
meat and vegetables each day but when prices spike suddenly it just means
buying less produce.

"We're just going day by day," she said. "We don't have any plans beyond the
next three days or a week."