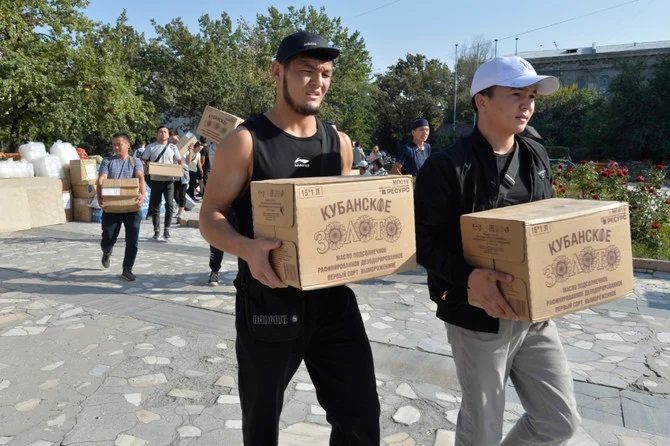 BISHKEK, Kyrgyzstan, Sept 18.2022 (BSS/AFP) - The Central Asian republics of Tajikistan and Kyrgyzstan traded new accusations Saturday over a ceasefire breach at their border, where deadly clashes broke out a day earlier despite a ceasefire.

Border disputes have dogged the ex-Soviet republics throughout their three-decade independence, with around half of their 970 kilometre-long (600 mile) frontier still contested.

The incidents took place in the southern Kyrgyz regions of Osh and Batken.

The two sides agreed a ceasefire Friday and Tajikistan's President Emomali Rahmon met his Kyrgyz counterpart Sadyr Japarov at a summit in Uzbekistan.

But the two countries traded blame for ceasefire violations only a few hours later.

On Saturday, UN Secretary-General Antonio Guterres called on the leadership of both sides "to engage in dialogue for a lasting ceasefire, said a spokesman.

"The United Nations stands ready to assist in identifying a sustainable solution to the border disputes, if requested by the sides," added Stephane Dujarric, spokesman for the UN chief.

On Saturday morning, Kyrgyz border authorities accused Tajik armed forces of attacking several border areas and settlements, including in the southern regions of Batken and Osh.

Talks between border guards from both sides took place in the Osh region during the day, according to Bishkek, which said this helped put an end to Tajik fire on three villages by midday.

Tajik border guards also said they would meet Saturday with representatives of the two sides to "discuss the stabilisation of the situation" and the "withdrawal of forces" sent to reinforce the border in the face of tensions.

But Dushanbe also accused the Kyrgyz army of having twice fired twice in the morning on Tajik positions.

Tajik border guards said the situation was "relatively stable" at 10:00 am (0500 GMT) in a statement to official news agency Khovar.

But they still accused the Kyrgyz army of violating the ceasefire and "deploying military reinforcements" at the border.

"Tajik border areas are being fired at from the settlements of Samarkandek and Koktosh in the Batken region (of Kyrgyzstan)," Tajik border officials said.

At least 24 people have died and 122 people have been injured in the clashes, including children, according to the Kyrgyz health ministry.

In the Batken region, Kyrgyz authorities declared a state of emergency and the head of Kyrgyzstan's State Committee for National Security, Kamchybek Tashiev, visited the scene to "coordinate the resolution of the situation."

On Saturday, Japarov said he would "not stop for a minute" efforts to settle the border with Tajikistan "as soon as possible", while promising that he would "not abandon a single square metre of land" in Kyrgyzstan.

Tens of thousands of people have been evacuated from Kyrgyzstan's border regions.

Tajikistan's interior ministry said civilians were killed in the clashes but did not provide figures.

In 2021, unprecedented clashes between the two sides killed at least 50 people and raised fears of a larger conflict.