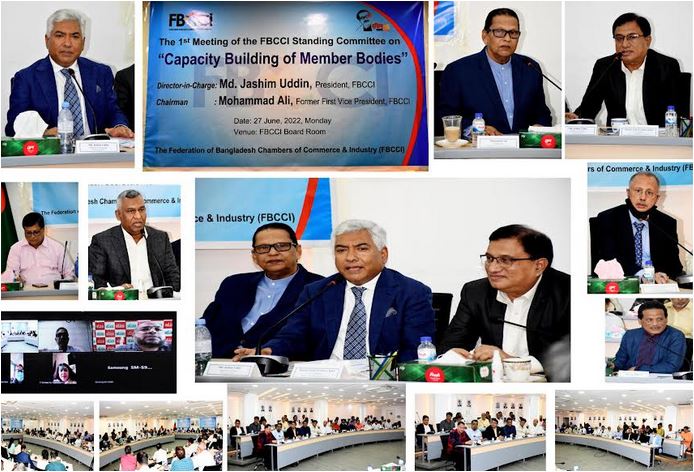 DHAKA, June 27, 2022 (BSS) - The Federation of Bangladesh Chambers of
Commerce and Industry (FBCCI) will arrange training for its chambers and
associations to enhance their capacity.

FBCCI President Md Jashim Uddin in this regard urged the trade bodies to make
a list of the priority sectors needed to increase capacity.

The Federation chief made the call at the first meeting of the standing
committee on capacity building of member bodies held today at the FBCCI
building in the capital, said a press release.

President of FBCCI and director-in-charge of the standing committee Md Jashim
Uddin informed that FBCCI is going to set up an Innovation Center to enhance
the capacity of the private sector to deal with the challenges of post LDC,
to achieve SDG-2030, Vision-2041 and other national development goals.

Necessary training will be arranged for various chambers and sector-based
associations through this center.

Jashim said that to adapt to the changed world trade system and global supply
chain and to utilize the potential of the 4IR, there is no alternative to
increase the capacity of the private sector.

Hence, an advisory panel with eminent economists, former government officials
and policy makers has already been formed to transform the FBCCI into a
research-based organization, he added.

FBCCI senior vice-president Mostofa Azad Chowdhury Babu said that most of the
chambers have already done well in building capacity. "The FBCCI will soon
organize meetings with chamber and association leaders in all divisions to
enhance the capacity of trade organizations."

Former first vice-president of FBCCI and chairman of the committee Mohammad
Ali called for strengthening the secretariats of the trade organizations to
make the organizations stronger and more dynamic.

Chamber, association leaders and the general members of FBCCI who were
present at the meeting urged the government to honour the FBCCI president
with the status of a Minister.

Vice-president of FBCCI and co-chairmen of the committee Md Aminul Haque
Shamim, Md Amin Helaly, co-chairmen Helal Uddin, Hazi Sabedur Rahman Khoka
Sikder were present, among others, at the meeting.