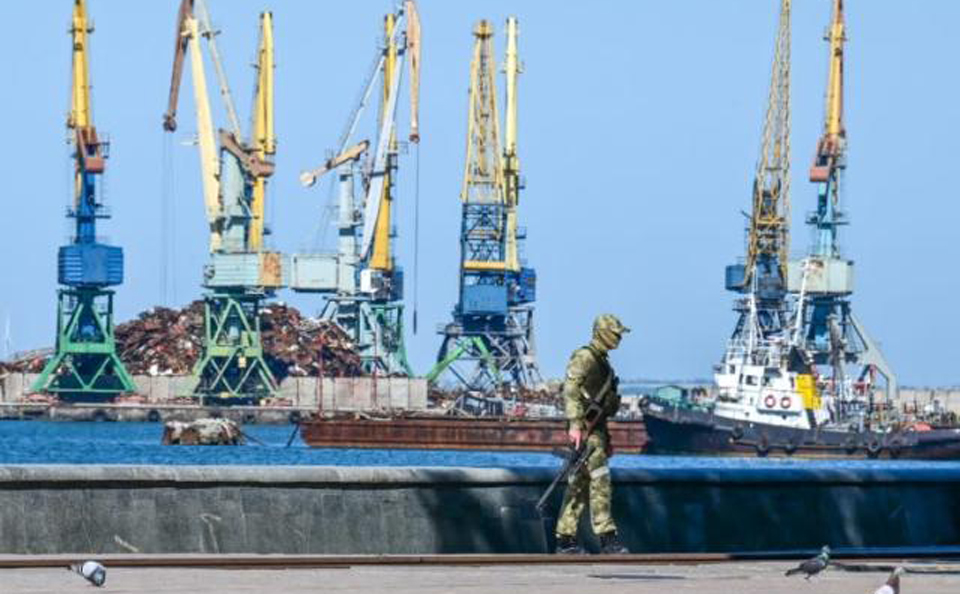 BERDYANSK, Ukraine, June 26, 2022 (BSS/AFP) - Little appears to have changed
for Alexei Andrusenko, the head of a foundry in Ukraine's southern city of
Berdyansk, who is happy to have kept all his staff since Moscow took control
of the city.

Andrusenko and his 50 or so employees continue showing up to work every
morning to the grey building in the outskirts of the port city on the shores
of the Sea of Azov.

But now the factory's produce -- once sold to Ukrainian or international
steel groups -- will likely be bound for Russia and Kremlin ally Belarus.

Since Russia sent troops into Ukraine on February 24 and captured territories
in the south of the pro-Western country, Moscow has sought to strengthen
their economic ties.

"We have no other supply chain," Andrusenko told AFP during a press trip
organised by the Russian army.

He also raised concerns about the depleting stocks of their raw materials
that previously came from neighbouring Mariupol, another key Ukrainian city
on the shores of the Sea of Azov.

Andrusenko says they are "interested" in working with the Alchevsk
steelworks, a large factory with over 10,000 employees that since 2014 has
been under the control of pro-Russian separatists of eastern Ukraine's
Lugansk region.

Before Russia sent troops to Ukraine, these deals would never have been
possible.

"The most important thing is to build the right supply chain and to be able
to work," Andrusenko said.

The southern Ukrainian regions of Kherson and Zaporizhzhia have been largely
under Russia's control since the first weeks of Moscow's military campaign,
and are now being forcefully integrated into Russia's economy.

The main economic asset of Berdyansk is its port, which has remained mostly
intact unlike that of Mariupol, the scene of a devastating siege.

In late March, an attack attributed to Ukrainian forces reportedly sank a
Russian warship in Berdyansk waters, but today the port is "almost 100
percent ready" to ship grain, says Alexander Saulenko, the Moscow-installed
head of Berdyansk.

Ukraine has accused Russia and its allies of stealing its wheat, contributing
to a global food shortage caused by grain exports blocked in Ukrainian ports.

According to Saulenko, grain will soon be shipped out from the port, since
silos will need to be freed up for the new harvest.

"We have prospects for contracts with Turkey. Russia is an agricultural
country, it has enough grain of its own so it would be more profitable to
trade elsewhere," Saulenko said.

But the most tangible influence of Moscow on the local economy is the
introduction of Russia's national currency since last month.

"Now you can buy everything in both rubles and hryvna," Ukraine's currency,
the pro-Russian official added.

According to him, Berdyansk received some 90 million rubles ($1.7 million)
from Russia, but state employees are still paid in hryvna and it is
impossible to withdraw cash rubles from ATMs.

Neighbouring Melitopol, about 100 kilometres (60 miles) west of Berdyansk
that came under Russian control on March 1, also uses the Russian ruble that
is delivered from Crimea, the Black Sea peninsula Moscow annexed from Ukraine
in 2014.

"It's a two-currency zone.... The ruble is delivered thanks to the open road
to Crimea. Commercial ties with Russia, interrupted after 2014, are
resuming," says Melitopol's pro-Russian mayor, Galina Danilchenko.

"People are happy to accept the ruble... I don't see any problems," she
added, but for reporters on the press trip it was difficult to speak freely
with the city's residents.

Back at the Berdyansk foundry, 41-year-old worker Sergey Grigoryev says he
just hopes to get paid his salary.

"In cash, not to my card, because you can't withdraw from it. In hryvnas or
in rubles -- I don't care".