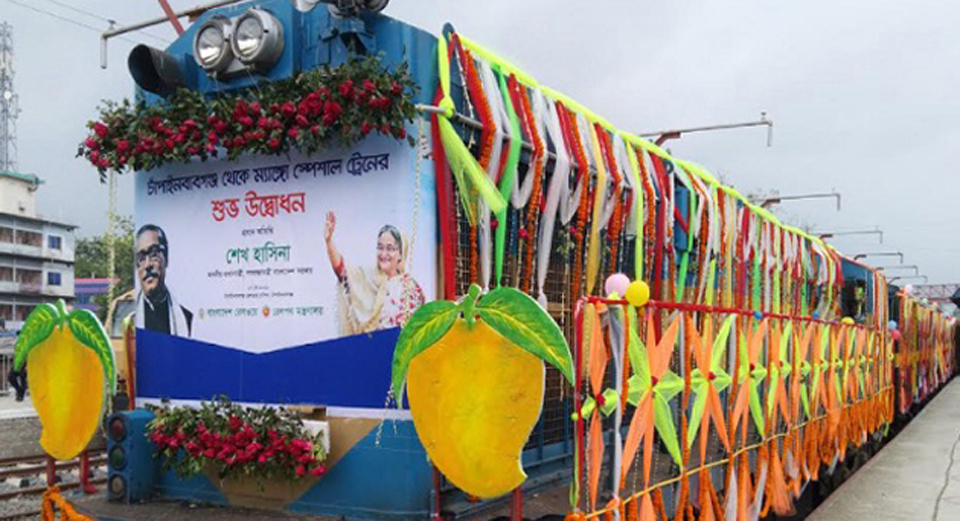 RAJSHAHI, May 18, 2022 (BSS) - The West Zone of Bangladesh Railway is likely to launch a 'special mango train' on Chapainawabganj-Dhaka route via Rajshahi from May 22 next for the third consecutive time.

"We have taken the decision of transporting mango to Dhaka from this mango producing area for the benefit of the growers and traders," said Asim Kumar Talukder, General Manager of the zone, illustrating aspects of the decision.

He said the initiative has also been taken to transport mangoes at a lower cost for the welfare of the mango traders and farmers. The train will depart from Chapainawabganj at 4.30 pm, while from Rajshahi station at 5.50 pm and will reach Dhaka at 2am.

The cargo train will carry a maximum 150 tonnes of mangoes in five wagons every day. So, farmers and traders can transport goods at their will. It will cost Tk 1.17 to carry a kilogram of mango to Dhaka from Rajshahi. And it is Tk 1.30 from Chapainawabganj to Dhaka. Asim Talukder clarified that transport of mangoes in the special train would cost Tk 1,117 per ton whereas courier services cost Tk 20,000 per tonne and private trucks cost around Tk 2,000 a ton.

The train will make a stoppage for loading mangoes at 14 stations on the Chapainawabgonj-Dhaka railway route via Rajshahi. The parcel train may have stoppages at other stations based on parcel booking and unloading.

In addition to mango, there is provision of carrying all kinds of vegetables, seasonal fruits, eggs and other agricultural products in less cost in the special train, he added. The railway porters will conduct all sorts of the loading and unloading works of the goods.

To this end, the porters were imparted need-based training on how to handle the goods from booking to loading as well to unloading properly. In 2020 last, the Mango Special Train was launched for the first time in the wake of growers' transportation problems.

"We have earned Tk 9.30 lakh revenue by transporting 857 tons of mango, lychee and other agricultural products," Talukder added. Officials said mango was cultivated on 26,150 hectares of areas in Rajshahi and Chapainawabganj districts where it's expected to yield 2,44,000 tonnes of mangoes this year.