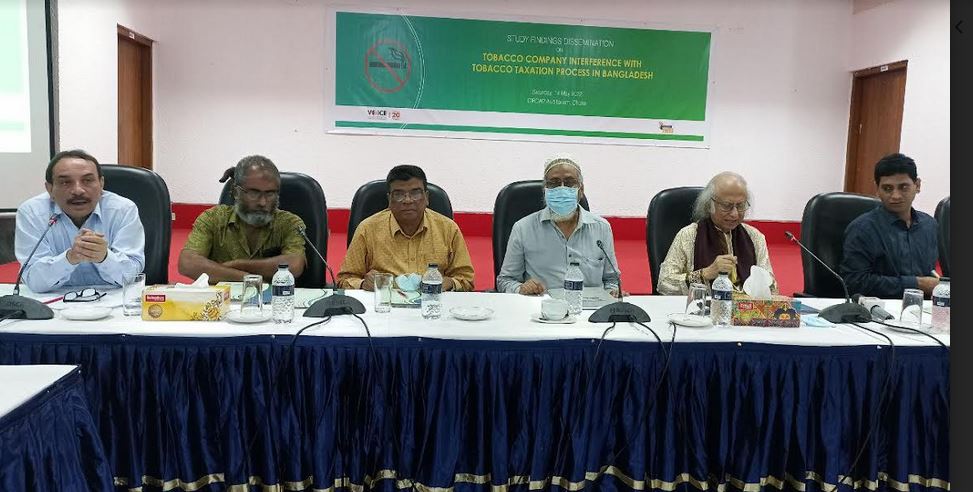 DHAKA, May 14, 2022 (BSS) - Civil society and anti-tobacco bodies said that the government should divest its investment from tobacco companies to show its commitment towards a tobacco-free Bangladesh by 2040.

They stressed the need for adopting a comprehensive tobacco tax policy including the end of tax preferential treatments for tobacco companies.

The speakers made the observation while revealing study findings on "Tobacco Company Interference with Tobacco Taxation Process in Bangladesh" held at the CIRDAP auditorium here today, said a press release.

VOICE, a rights-based research and advocacy organization, arranged the event to share the findings of the study.

The speakers said National Board of Revenue (NBR) should prioritise public health over tobacco company profitability as tobacco tax revenues are a fraction of the public and private health cost burden resulting from tobacco use.

They urged the government to prohibit tobacco company representatives and affiliates from directly or indirectly participating in tobacco control agenda setting, policymaking, and other government positions and processes that pose inherent conflicts of interest.

He said that many strong evidences of the illegal interference of tobacco industries have come out as findings.

Chairman of PKSF Dr Qazi Kholiquzzaman Ahmad said the government should divest from British American Tobacco Company and sell all shares to show its commitments to make the country free of tobacco.

He said a uniform specific tobacco tax rate would be far more effective for reducing tobacco consumption and its affordability in Bangladesh.

"This system tends to lead to higher prices for all brand levels, reduces the incentive to switch to lower-priced brands, and is easier to administer when compared to ad valorem one," he said.

He said tobacco industry interference in the national policy making has been going on for many years in a very strategic manner.

Former chairman of NBR Muhammad Abdul Mazid said no political party has kept "tobacco-free Bangladesh" as an agenda in their official manifesto.

He said tobacco industry involvement in any youth, public education, or other tobacco control initiatives should be banned.

"CSR activities carried out by the tobacco industry also should be prohibited," he added.