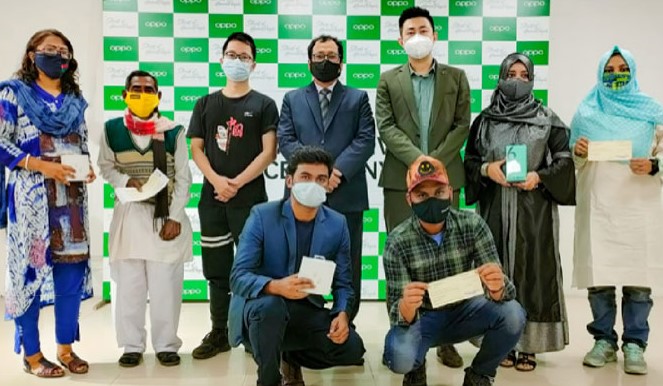 In a ceremony at its headquarters, OPPO Bangladesh also ended up the campaign through handing over cheague to three heroes, said a press release today.

The three who were awarded in the function are Dulal Sir, Rabindranath Biswas and Sajedul Islam.

Dulal Sir was subjected to inhuman torture at the hands of Pakistani forces during the liberation war. However, upon his survival, he again devoted himself to patriotism. Later, 65-year-old Dulal Sir built several educational institutions and mosques in his area to ensure education for all. He also taught students in Anirban Vidyalaya.

Besides, Rabindranath Biswas, hailing from Batiaghata Upazila of Khulna, and 70-year-old freedom fighter and village doctor treated war-wounded freedom fighters in 1971. Since then, he has been providing free medical services for the poor and needy people. Although his name is not on the list of freedom fighters, he is not disappointed because to him, and human welfare is more important to him than recognition.

On the other hand, Sajedul Islam has been involved in various social activities as a volunteer.

He donates blood himself and encourages others to donate. During the Covid-19 pandemic, he joined hands with Gopalganj Bandhu Mahal and provided free oxygen cylinders to dying patients.

The stories have been selected from thousands of stories collected in the “Stories of the Heroic People” social activity campaign which was conducted during the national victory day as a tribute to the national heroes.