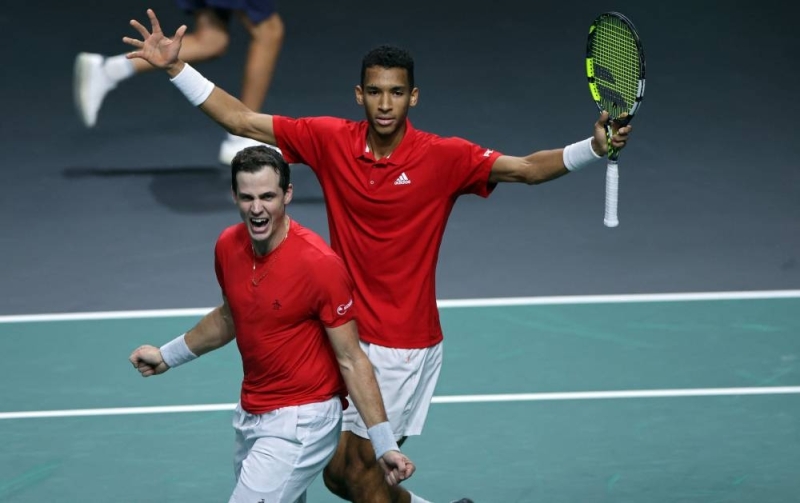 The 22-year-old Canadian then replaced the out-of-form Shapovalov to partner Vasek Pospisil in the decisive doubles and the gamble paid off in a 7-6 (7/2), 7-5 win over Matteo Berrettini and Fabio Fognini.

Berrettini, ranked 16 in singles but only 827 in doubles, replaced Simone Bolelli but the late switch by skipper Filippo Volandri backfired.

On Sunday, Canada, runners-up to Spain in 2019, will attempt to win the Davis Cup for the first time when they tackle Australia who haven't played in the final since 2003 when they claimed a 28th title.

In a doubles clash which lasted two hours, the Italians were made to regret surrendering early breaks in both sets.

The Canadian duo broke decisively for 6-5 in the second set before sealing their spot in the championship match.

Earlier, Auger-Aliassime, the highest ranked singles player in Malaga this week, carved out two breaks of serve and fired 12 aces past 23rd-ranked Musetti in a comfortable win.

World number 45 Sonego had sealed victory in 3hr 14min after back-to-back double faults from 18th-ranked Shapovalov, who had won their only previous meeting in Rome earlier this year.

Shapovalov paid dearly for only converting one of 13 break points while Sonego could have wrapped up the clash in straight sets after being 5/2 ahead in the second set tiebreak.

"It was really tough to remain focussed because I lost the tiebreak in second set. But I was really positive and my captain helped me a lot to do my best to stay in the match. I enjoyed the match in the last moment," said Sonego.

Australia reached the final on Friday with a 2-1 win over last year's runners-up Croatia.