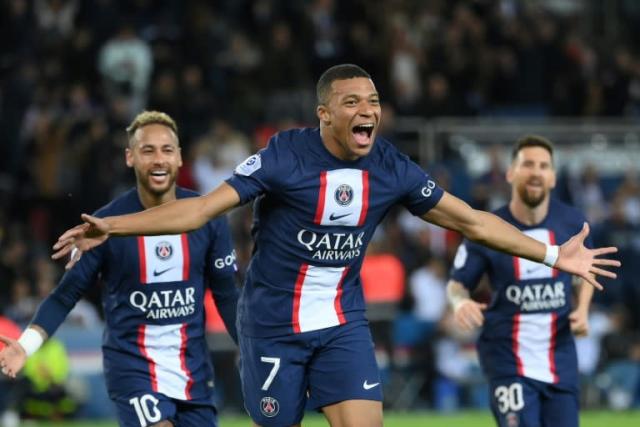 French international Mbappe was left out of the starting line-up by coach Christophe Galtier with one eye on Wednesday's Champions League clash at Benfica.

That is one of 11 fixtures the French champions face in the six weeks leading up to the World Cup.

Mbappe was replaced by 20-year-old Hugo Ekitike, who was making his first start for PSG but struggled to make an impact.

However, it was fellow superstar Lionel Messi who grabbed the attention when he gave PSG a 29th-minute lead with a sumptuous, curling free-kick from the edge of the box which sailed over the Nice wall and past goalkeeper Kasper Schmeichel.

"I'm incredibly lucky to see him every morning in training," said Galtier.

It was Messi's 60th career goal from free-kicks but first in a PSG shirt.

"We are not playing less well than we were, but our opponents are starting to know us," said PSG defender Marquinhos after a disjointed display by the champions.

"We are not going to have an exceptional match every time or win 5-0. It's important to know how to win 1-0 or 2-1 with a goal at the end, like tonight.

"It was complicated in the first half, we couldn't find any space to create chances. Nice blocked us but a superb free-kick Leo Messi unblocked the situation."

Gaetan Laborde levelled for Nice, who were coached by Galtier until this season, in the 47th minute after PSG got into a terrible defensive tangle.

Mbappe was summoned from the bench on the hour mark and struck the winner with seven minutes left after Nice attempted and failed to play the ball out of defence.

The goal was Mbappe's eighth of the league season and took him level with teammate Neymar at the top of the scoring charts.

"You play the best game of your season, but at the end, you lose," said Nice coach Lucien Favre after his team's fifth Ligue 1 defeat of the season.

"We played a good match, so it's disappointing and cruel. We didn't give PSG a lot of chances to score. They didn't have many chances."

PSG have a two-point lead over Marseille who defeated Angers 3-0 on Friday.