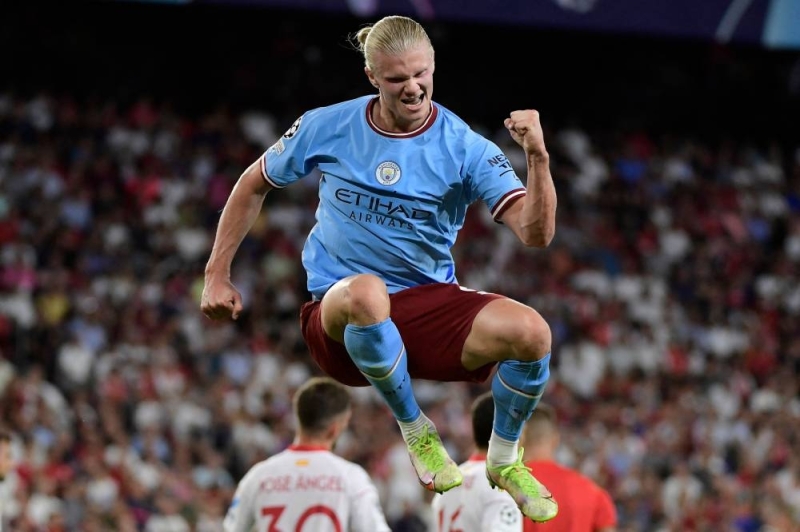 Haaland has made a blistering start with City since joining the Premier League champions from Borussia Dortmund for o51 million ($57 million) in the close season.

With 14 goals in nine games in all competitions for City, the Norway striker, playing in his first Manchester derby, will put United's recent revival to the test.

Only once has Haaland been denied a goal in the Premier League this season, but United manager Ten Hag might have the solution to taming the prolific 22-year-old.

When Ten Hag's Ajax faced Dortmund in the Champions League last season, they stopped Haaland scoring and won the group match thanks in large part to an inspired display from a tenacious defender now plying his trade with United.

Ten Hag brought Martinez with him to Old Trafford in the summer transfer window in a deal that could reach nearly o57 million and the 24-year-old is already producing commanding performances.

At 6 feet 4 inches (1.93 metres), Haaland will tower over Martinez, who is the Premier League's smallest centre back at 5ft 9in.

But the aggressive Argentine does not let his diminutive stature stop him taking the fight to opposing strikers.

Living up to the "Butcher of Amsterdam" nickname given to him at Ajax, Martinez has already earned cult hero status among United fans with some ferocious tackling.

Partnering with Raphael Varane in central defence after Harry Maguire was dropped two games into the season, Martinez has shored up a unit that was United's Achilles heel last season.

United have won all five games in which Ten Hag has played Martinez and Varane together at the heart of the defence.

Ten Hag calls the Argentine a "warrior", lauding his "attitude and fighting spirit".

But he knows keeping Haaland off the scoresheet at the Etihad Stadium will be a tall order if Martinez does not get enough help from his team-mates.

"We don't play against Haaland, we play against Man City," said Ten Hag. "We are convinced of our capabilities. If we act as a team we can beat our opponents.

"We need to look to ourselves. We have to perform at our best, with a good game plan. Then it is about execution. We will have to do 100 percent."

Haaland's predatory instincts give City an even more imposing look than last season, when they won the Premier League title despite lacking an elite central striker.

However, City boss Pep Guardiola is well aware that Martinez could pose a formidable barrier to Haaland's hopes of extending his run of scoring in seven successive club games.

"Erling is taller. But knowing from my experience, there is no doubt about Martinez. It's not the first time he'll play against strikers taller than him," Guardiola said.

Like Haaland, Ten Hag will be pitched into the Manchester derby cauldron for the first time.

"I have played many derbies. I know what they are -- the most important game," Ten Hag said.

Ten Hag might not have history in the battle for Manchester bragging rights, but he is no stranger to Guardiola.

Guardiola was Bayern Munich boss when Ten Hag coached the German club's reserve team, with the Spaniard once suggesting his former colleague could eventually replace him as City manager.

"It's a nice compliment, first, but I'm 100 percent convinced I choose Manchester United with everything in it and I didn't regret it for one second," Ten Hag said.

After successive defeats plunged United into crisis at the start of his reign, Ten Hag has recovered so impressively that he was voted the Premier League manager of the month for September on Friday.

Second-placed City are five points ahead of fifth-placed United and Guardiola urged his side not to let the frenzied derby atmosphere distract them from the task of maintaining that gap.

"We have to try to figure out what they are going to do but you don't have to have extra emotions, everyone knows what it is," he said.