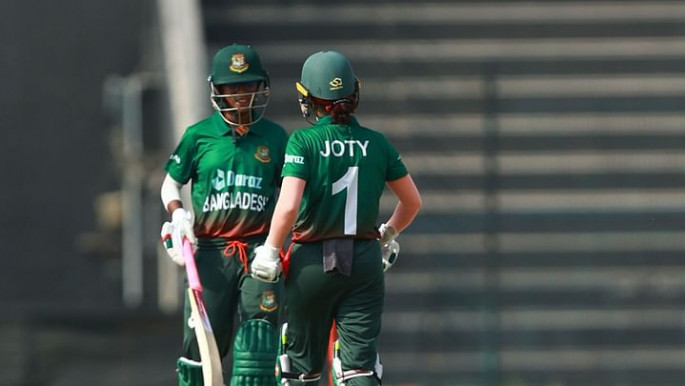 The Tigresses' 2023 South Africa T20 World Cup ticket was confirmed when they
moved to the final but the original goal of these indomitable girls was to
break all the barriers, coming to haunt them.

And their grit and determination helped them win the game against Ireland who
also confirmed the T20 World Cup alongside Bangladesh. The achievement came
amid the jubilation of Bangladesh Women Footballers winning the SAFF
Championship, marking the women's giant stride in the country's sports arena.

Bangladesh however became hat-trick champions in Qualifying tournament,
having done so the same in 2018 and 2019. They became runners-up in 2015. But
they expected that from the next year, they won't have to play the Qualifying
tournament for World Cup ticket and for this they need to perform better
throughout the year, which is now the target of Nigar Sultana Joty and her
team.

Rumana Ahmed was the other one to reach double digit figure with 21 off 20.
No other Bangladesh batter could make impact in the high octane game against
a highly disciplined Irish attack.

Laura Delany was the pick of Ireland bowling with 3-27 while Arlene Kelly and
Cara Murray grabbed two wickets apiece.

Bangladesh indeed won the game, thanks to their well organized bowling, led
by Rumana Ahmed who ended with 3-24. She was ably aided by Sanjida Akhter
Meghla, Nahida Akter and Shohely Akhter who all bagged two wickets apiece as
Ireland were held back to 113-9, despite raising the prospect of winning the
game.

Arlene Kelly was the highest scorer for the Irish with 28 not out while Mary
Waldron made 19 and Eimear Richardson added 18.