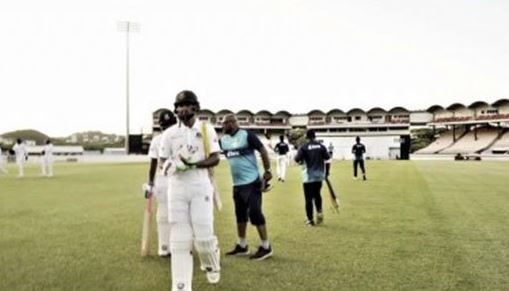 DHAKA, Aug 14, 2022 (BSS)- The two-match four-day series between Bangladesh A
and hosts West Indies A ended in a draw after the second match was drawn at
Daren Sammy National Cricket Stadium, Gros Islet in St Lucia.

The first game also ended in a draw after the resistance of skipper Mohammad
Mithun.

In the rain-hit second game, Saif Hasan was a shinning spot for Bangladesh as
he scored 146 to help the side pile up 300-9 (declared).

The second best was 33 by wicket-keeper Jaker Ali and it demonstrated the
fact that how one-man show was the Bangladeshi innings after West Indies A
team asked the second string Bangladesh to bat first.

Opener Shadman Islam made 25 while Mahmudul Hasan Joy continued his poor form
to be out on 17.

Saif played 348 balls for his knock in the pitch that assisted the bowlers.
He struck 13 fours and four sixes in his mega innings.

West Indies A were 227-5 as the umpires called it a day on Day four which was
the final day of the match. Tagenarine Chanderpaul, the son of West Indies
legend Shivnarine Chanderpaul was the top-scorer for the side with 109. Alick
Athanaze was the other notable contributor with 82.

The two teams next will play a three-match one-day series, which are slated
for August 16, 18 and 20. All of the matches will played hosted by the Darren
Sammy Cricket Stadium in St Lucia.