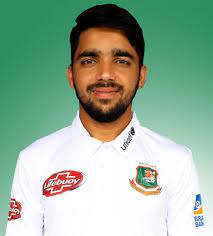 Mominul's lean batting streak extended to ninth straight single digit figure after he scored just 0 and 4 in the both innings of the first Test that Bangladesh lost by seven wickets.

Mominul, however, stepped down from the captaincy ahead of the series to regain his batting form but it still didn't help him, leaving the team management helpless as Bangladesh continued to suffer from top order collapse.

Anamul Haque Bijoy who was called up in the Test squad after eight years replaced Mominul. Coincidently Anamul played his last Test at this very venue in 2014.

Bangladesh made another change from the first Test as Mustafizur Rahman was dropped to make way for another left arm pacer Shoriful Islam.
West Indies have made one change to their XI with Gudakesh Motie making way for Anderson Phillip, who makes his debut in this match
Line Ups: