Mominul out of runs, not out of form: Domingo 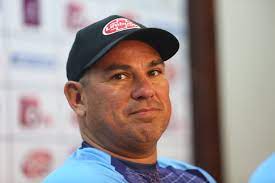 DHAKA, May 23, 2022 (BSS)- Bangladesh head coach Russell Domingo backed
Mominul to get back to amongst runs very soon, saying that the Test captain
is not out of form, rather he is out of runs at this moment.

Mominul extended his lean streak to six consecutive single-digit scores when
he was caught behind off Fernando for 9 in the sixth over in the first
innings of Bangladesh on the opening day of second Test against Sri Lanka.
This was his 11th single digit score in the last 14 innings.

Domingo said he found no problems in Mominul's technique as the captain
looked 'really good' in the net.

"I don't think he (Mominul) is off form. He is not getting runs. He looked
really good when I watched him in the nets even this morning. His positions
are really good. He is out of runs, not out of form," Domingo said here
today.

"He has a fantastic record. He has the most Test hundreds for Bangladesh, in
51 matches. Mushfiq got his ninth in his 82nd Test. Mominul knows how to get
runs. All players go through slumps in form. As coach, it is your job to
support those players who lose a bit of confidence and belief. Make sure that
they get out of their slump," he added.

Domingo reminded everyone that Mominul had a knock of 88 in New Zealand which
helped Bangladesh get a memorable victory.

"Four Tests ago he got an unbelievable 80-odd in New Zealand. It set up the
game that we won. It is not a long time ago. No player gets runs in every
single game. There's a big score around the corner for him," he remarked.

Domingo also backed Najmul Hossain Shanto who kept continuing to be out on
single digit figure.

"Shanto will probably be the first to admit that it wasn't his best shot. He
is a tighter player than that. He has a lot of learning to do in the
international cricket," Domingo said.

Reminding Liton's slump, Domingo said Shanto also has the potential to be a
future of Bangladesh like Liton.

"I think he can be a fantastic player for Bangladesh. People must remember
there were a lot of questions asked about Litton's ability. He is now
averaging nearly forty," he said.

"Batting at the top-order is never easy, against the new ball under a little
bit pressure. But I know he is a quality player."