Tigers gear up to confirm series against New Zealand tomorrow 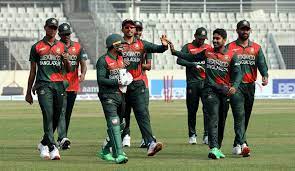 way and thereby confirm the five-match Twenty20 International series against
New Zealand as they take on the visitors in the fourth game tomorrow
(Wednesday) at the Sher-e-Bangla National Cricket Stadium.

The match which starts at 4 PM will be aired live in Gazi TV and T sports.

The Kiwis in fact showed their ability to cope with the slow surface in
surprisingly quick fashion and suddenly raised a prospect of winning the
series too when talks were doing the rounds of a 5-0 result in Bangladesh's
favour.

In fact the way Bangladesh crushed Australia by 4-1 in the five-match
series, they were dubbed absolutely favourite against Blackcaps who sent a
team, full of young players, who are yet to cement their place in the main
team.

But the Kiwis performance in the last two matches spoke a volume of their
capability. In second match, they are actually on the way to win the game but
only an extraordinary bowling effort of Mustafizur Rahman denied their
victory. But they didn't let Bangladesh dominate the proceedings in the third
match and won it in style, bowling Bangladesh out for their joint second
lowest ever score of 76, which is also their lowest ever at home.

Despite getting the wicket, strongly suited their strength, Bangladesh's
performance was below par when Kiwis came up with spirited performance. It
clearly indicated Bangladesh need to lift their game to a great degree if
they want to hit back in the winning ways.

Skipper Mahmudullah Riyad, who now lost the game on his 100th T20
International game as first Bangladeshi batsman, rued for lack of partnership
but believed they are capable of bouncing back and thereby confirm the
series.

"The bowlers did a great job to restrict them to 130. We started well, but
we lost wickets in a cluster, and couldn't capitalise on it."

The main problem of Bangladesh was the off form of Shakib Al Hasan in the
third game. Standing on the brink of being the first player to score 12000
runs and claim 600 wickets simultaneously and also being the highest wicket-
taker in T20 International cricket, going past Lasith Malinga's 107 wickets,
Shakib was surprisingly off-colour.

Shakib needed just two wickets to reach those two milestones. But he went
wicket-less in the last match, was dismissed for duck and also missed a
catch.

Shakib's performance is needed to help the team get back on track.

When Bangladesh is looking to plug the loopholes that were now wide open
after the defeat, New Zealand vowed to keep the winning spree.

"It is nice to win and keep the series alive. As a group, we are improving
every game. The conditions have varied in each game, which is another
challenge in itself. It is great to see guys learning on the job
effectively," said New Zealand batsman Henry Nicholls who were part of a
match-winning 66 runs partnership with Tom Blundell for unbeaten sixth wicket
to help the side win the third game eventually.

"Tom (Latham), as the captain, has been really clear with the guys telling
them that it is tough but we have to look to find ways to improve. If we keep
doing it each game, those results will come. We turned the tables a little
bit on Bangladesh. Put them under pressure. It can be tough for them as
well,"

"We saw Australia come here before and they struggled in a format they
know really well. When we play at home, we take pride on that as well. We
knew they were going to be a strong challenge. The spinners set the tone for
us, and we could put them under pressure. We know if we can do the little
things well, there's a lot of success there for us."

As per the stat, the two teams so far locked horns in 13 matches with
Kiwis winning 11 and Bangladesh rest of the two-which came in this series.

However, the Tigers' stat in T20 cricket still looked not up to the mark.
They so far played 111 matches and won 40. They had lost a staggering number
of 69 matches while two matches fetched no result.