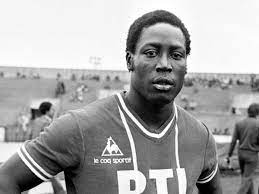 Adams, who made 22 international appearances in the 1970s, slipped into a
coma after a mistake by his anaesthetist during routine knee surgery in 1982.

Born in Dakar in 1948, he was one of the first men born in West Africa to
play for France.

His centre-back partnership with Marius Tresor for France was nicknamed
"the black guard".

"We learned this morning of the death of Jean-Pierre Adams," Nimes wrote on
Twitter, extending their "sincere condolences to his family".