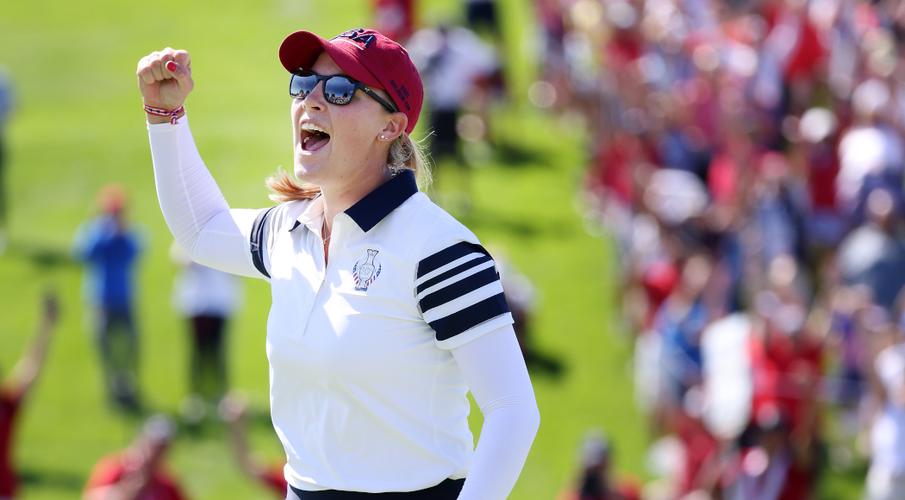 The United States had stormed back into contention in the biennial match play showdown at Inverness Club in Toledo, Ohio, winning three of the four morning foursomes to move within one point of defending champions Europe.

After being outplayed on Saturday as Europe powered into the lead, the US women rallied superbly to change the complexion of the contest, leaving Europe with a slender 6 1/2 to 5 1/2 point lead heading into the afternoon fourballs.

Europe regained the advantage however, as Charley Hull and Emily Pedersen defeated Danielle Kang and Austin Ernst 3&2 while Carlota Ciganda and Nanna Koerstz Madsen pulled off a 1-up victory over Jessica Korda and Megan Khang.

Americans Jennifer Kupcho and Lizette Salas held a 1-up lead over Mel Reid and Leona Maguire with one to play, but Reid's birdie for the Europeans gave them a valuable half a point -- and stamped the duo as the star turn of the week.

"I think it was a pairing neither of us saw coming but the captains obviously saw something in us that we didn't see in ourselves," Maguire said.

"I think we're both fearless on the golf course, which is something you need to be in those matches, especially given the pairings we were up against," added Maguire. "I mean, Nelly and Jessica yesterday, Nelly and Ally today, world-class players, and we really had to be on our 'A' game to come out with a point."

Reid said she felt her role as a Solheim Cup veteran was to make Maguire "feel comfortable," but she said the newcomer had what it takes for the format.

"That grit and determination is second to none," Reid said of Maguire.

Their contribution was key after Kang and Ernst led the early US fightback against Georgia Hall and Madelene Sagstrom in foursomes, recovering from falling two down in the opening two holes to secure a battling win.

"It was huge," Ernst said. "We knew we needed to get a point for the team and get it turned early. We knew they send us out first for a reason."

Hull and Pedersen led by one hole after four, but the US duo restored parity with a birdie on the seventh, and then went ahead when the European pair bogeyed the eighth.

Thompson and Altomare retained a 1-up advantage heading to the 17th, and when Pedersen and Hull parred it looked as if the match would be settled on the 18th.

But a magnificent long birdie putt from Thompson on 17 won the hole to give the Americans a 2&1 victory, electrifying the large crowd gathered around the green.

The superb morning for the Americans got better when Salas and Kupcho staged an irresistible late rally to down Anna Nordqvist and Matilda Castren 3&1.