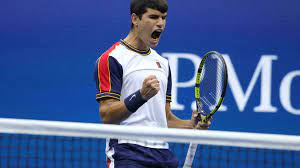 NEW YORK, Sept 4, 2021 (BSS/AFP) - Carlos Alcaraz dug deep for the best tennis of his career when it mattered most and the 18-year-old Spaniard was rewarded with a dream upset of third-ranked Stefanos Tsitsipas.

"I have not words to explain how I'm feeling right now," Alcaraz said. "I just don't know what happened out there in the court. I can't believe I beat Stefanos Tsitsipas in an epic match.

Alcaraz is the youngest man in the US Open last 16 since 17-year-old American Michael Chang in 1989 and at any Slam since Ukraine's Andrei Medvedev in the 1992 French Open.

He became the youngest man to beat a top-3 player at the US Open since the rankings began in 1973.

After being blanked in the fourth set, he out-battled Tsitsipas in a tension-packed final set.

"One hundred percent he can be a contender for Grand Slam titles," Tsitsipas said. "He has the game to be there.

"In the beginning of the first set, (he) came really strong. Ball speed was incredible. I've never seen someone hit the ball so hard. Took time to adjust."

Alcaraz was even more impressive to the French Open runner-up down the stretch.

"I've never seen someone play such a good fifth set," Tsitsipas said. "I didn't expect him to raise his level so much, especially after having lost the fourth set this way. He was a completely different player.

"He dealt with (pressure) really well. That's something that's going to reach the top."

After firing a forehand winner on his third match-point chance of the deciding tie-breaker, Alcaraz collapsed onto the court in joy, thinking of his earliest supporters in his Spanish hometown.

"When I fall into the court at the end of the match I thought my family and my friends, other people who was supporting me in Murcia, all my team also supporting me from the academy," Alcaraz said.

"I thought (of) every person that was supporting me from Murcia from the beginning of this history when I was a kid and everything. Was amazing."
Alcaraz was the clear crowd favorite at Arthur Ashe Stadium, roars rising for deserved dazzling shotmaking.

"It surprised me, really. The crowd was behind me all the time, supporting me, pushing me up in every moment," he said.

"The crowd was important for me. I think without the crowd I couldn't have the opportunity to play a great fifth set and beat Stefanos. The crowd was really amazing. I really loved it."