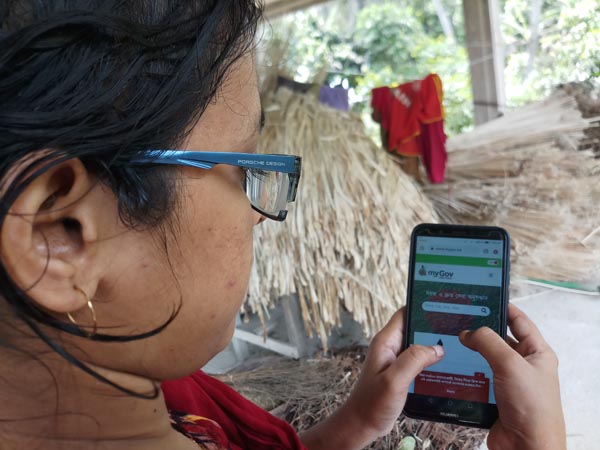 DHAKA, August 04, 2021 (BSS) – Fatema Akter Baby, a resident of Dhaka’s Ashulia area, has a great desire to set up a cattle farm aiming to become a woman entrepreneur but she has no land available to build it.

Six months ago, Baby was thinking of how she could manage a piece of land to set up her cattle farm but she did not find the land to make her dream come true.

But Baby did not stop her effort and she was looking for the land. One day she found a fallow khas land near her house.

Later, she knew from her husband that she can apply for the lease of khas land digitally and she was informed of “myGov App”.

“Then I applied for the lease of non-agricultural khas land to the Dhaka Deputy Commissioner’s Office using the app. The authorities accepted my application and informed me that they were scrutinising my application and let me know about it later,” Baby said.

In conventional way, submitting an application for taking the lease of khas land is a time consuming and complex, she said, adding, “But submission of my application using the app worked like a magic. I did not face any hurdle to do so.”

Ismail Hossain of the capital’s Motijheel wanted to initiate an internet business and that why, using "myGov App", he applied to Bangladesh Telecommunication Regulatory Commission (BTRC) for a license to this end.

“Five months back, I applied for the license. I submitted all documents required. The BTRC informed me that now its license issuing process is suspended. Once it resumes the process, I will be given a license,” Ismail said.

Like Baby and Ismail, many people are submitting their applications to the government offices using “myGov App” or Eksheba Uddokta (all government services in one place), seeking public services.

Selim Miah, assistant commissioner (Land) of Netrokona Sadar, said his office has been providing land related services digitally. “We are providing e-Mutation and other e-land services, and we have been holding online hearings too,” he added.

myGov platform was launched with an aim to bring all the government services under a single umbrella. Users can also get various information and services from the app dialling 333 from their phones.

For necessary information services, application and document submissions, application fee payments and post-application updates can be found in the app. Using voice only, service application, updates and other issues can be known. The identities of the applicants can be confirmed through the national identity cards (NIDs).
Officials said this platform has already digitised about 1,056 services under its Rapid Digitisation, while more that 32.38lakh people have so far used the myGov system in getting government services.

Monzur Ahmed, enterprise integration expert of the Aspire to Innovate (a2i) Programme, said the country’s people now can avail 450 government services using the myGov platform. Within this year, he said, about 2,000 more government services, including education and agriculture ones, will be added to this platform.

Monzur said, at present people need smart phones to receive the services by using the myGov app and they have been working to make the service receiving process easy so that applicants can use the app with slow internet speed.

The government has set a target to transform Bangladesh into a knowledge based one by establishing Digital Bangladesh in the 21st century. To achieve the goal, all levels of services, including education, health, management, working methods, industry, trade and production, economy social and cultural life, will be digitalised.

The government, led by Prime Minister Sheikh Hasina, has been working relentlessly in the last 12 years to implement its Vision-2021 – Digital Bangladesh. In the meantime, people from both rural and urban areas are getting benefits of “Digital Bangladesh”. Citizens across the country are able to receive services easily even in marginalised areas easily, timely and at a less cost.

Various initiatives have already been taken to build a digital Bangladesh. As part of those, the Aspire to Innovate-a2i programme is being implemented jointly by the Cabinet Division and the ICT Division with support from UNDP.

"myGov" is a central platform providing digital services of various public bodies under a single digital platform. Digitalisation of all the public services is in progress.

Gradually, according to the programme officials, the digital services of all the ministries will be integrated into the myGov platform so that people can receive all the services from one platform. It is also possible to provide any type of document and payment online at a low cost.