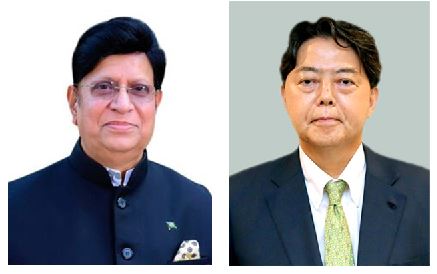 DHAKA, Dec 2, 2021 (BSS) - Japanese foreign minister Hayashi Yoshimasa has assured that his country will continue its efforts in commencing repatriation of forcibly displaced Rohingya from Bangladesh to Myanmar.

Yoshimasa wrote this in reply to Dr Momen's congratulatory message on his appointment as the new Japanese foreign minister.

The Japanese foreign minister said his country will encourage Myanmar to create conducive environment for speedy repatriation of Rohingyas in safe, volunteer and dignified ways.

Yoshimasa said the bilateral relations between Japan and Bangladesh based of trust, cooperation and mutual welfare.

The Japanese foreign minister expressed hope that the ties between the two countries will be further strengthened while the two nations will celebrate their 50-year anniversary of bilateral relations in 2022.